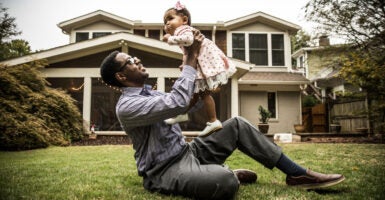 Is America good? That’s the real question we have been debating these past few weeks. The answer, of course, is obvious to all but a few true radicals.

Yes, America is good. That doesn’t mean America is perfect, and it doesn’t mean we should not strive to make America better, but the criticisms we make should have some grounding in facts, in history, and in comparison with the rest of the world.

The most noteworthy thing about the recent protests is how much they have actually accomplished. The protesters—the reasonable ones, at least—have won. Many don’t seem to realize it, but we are discussing race and racism like never before. Even for those of us who do not think America is institutionally racist, the current debate has caused a new level of analysis and reflection.

I’ve had more people tell me they have changed their views on issues like Confederate names than ever before. The reality is that a country founded on the principle that “all men are created equal” should be held to a higher standard. It’s a standard we have not always met.

The historical context to all this is, of course, important. We can’t judge America’s Founders by 2020 standards. The world they inhabited was different, but even back then, some pointed out the hypocrisy of a country with a legal regime governing slavery claiming to believe in the rights of all men.

It’s also important to temper that criticism with the knowledge that slavery is not a fundamentally American institution. It has existed throughout history, all over the world. It still exists today in some parts of the world. Left-wing teachers don’t include these sorts of facts in their lessons because they don’t help their preferred narrative, so many kids aren’t even aware of them.

American injustices did not end with the Civil War and abolition. Think about how a black man who fought for our country in World War II only to return and not be allowed in a restaurant or coffee shop would feel. The Jim Crow era didn’t end that long ago.

And even today, a black person can fight for our country in the Middle East and return to have their local public school, where they have to send their kids, named after a Confederate general. There is something wrong with that. The current debate has caused many people to realize this.

Despite this necessary reassessment, there is a reason that people from countries all over the world still scramble and sweat for a shot at immigrating to America. In the scope of world history, even with its flaws, America has been a remarkable place. This is mostly due to our freedoms.

The key to all this is our First Amendment. To many protesters today, that fundamental right to free speech is being downgraded. “Cancel culture” demands an all-out assault on anyone not 100% with the progressive agenda. If you are in that group, they are coming for you.

Protesting in the wake of the George Floyd tragedy is not only allowed but also a fundamental American right. But protesters of good will are being joined by a truly radical element whose goals go well beyond police reform.

Calls to defund the police and shut down speech are just the start of the radical agenda. The facts, records, and radical quotes from the hard-left leadership behind some of these groups are available for anyone to see. The media isn’t reporting on it though.

Deposing President Donald Trump has become a matter of good versus evil for a broad swath of our corporate media. According to this mindset, anyone perceived to be with Trump must be destroyed completely. Pointing out the truly radical element involved in some of our protests may help Trump, so these facts must be buried.

The biggest tragedy of the Trump era is we have greatly expanded the divisions in our country. This started well before Trump, but it has accelerated. These days, people mostly talk to those who share their views.

The internet has made everything more efficient, including political communication. If someone wants to, they can spend their whole day reading and debating with people online who only share their exact views. Many do. The result is drastically increasing polarization and less tolerance of dissent.

We are more likely to view those we disagree with through a caricature lens. If you read what the other side is really saying, and not just the short quotes selectively pulled to make them look their worst, you would see we are often not as far apart as you may believe.

But if you only view the other side through your caricature lens, reading short snippets with no context and believing the worst about each one, you end up with a country where people don’t really understand their opponents. It’s easier to view people as evil when you don’t know them and don’t listen to them. This is happening on the left and the right.

What we need more than anything is reasonable people who love the country to come together and talk. The corporate media used to be the home for this sort of debate. Those days are over. The crazies are at the helm today. Someone has to have the guts to say stop.