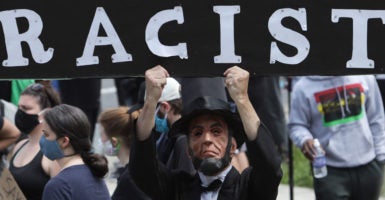 A man dressed as Abraham Lincoln protests on June 2 in Washington, D.C. Radicals are threatening to tear down a statue of Lincoln in the city's Lincoln Park. (Photo: Alex Wong/Getty Images)

The war on history has spread across our country and has even spilled over to other parts of the Western world.

Now, on a daily basis, we see scenes of lawless mobs attacking and tearing down statues, and defacing monuments of every type—often as authorities stand idly by.

But this violence has hardly been reserved just for statues.

After toppling a statue of an abolitionist who gave his life to the cause as a member of the Union Army, a mob in Madison, Wisconsin, mercilessly beat a Wisconsin Democrat state senator who supported the protests.

Mob rule is indeed coming to America. It must be stopped.

Authorities have numerous tools to stop the destruction if they would just show the willingness to use them. Failure to act will only encourage more acts of vandalism and destruction.

As I explained in my book, “The War on History: The Conspiracy to Rewrite America’s Past,” the attacks on our shared history go beyond any individual or statue.

What’s in peril now is not just the reputation of Christopher Columbus, the merits of the Founding Fathers, or the legacy of the Civil War. It’s something much broader and deeper.

What’s being threatened is the long history of ideas and institutions created and developed in the West.

The United States, of course, has been the prime target of radicals, because—whether we chose this role or not—it is the pinnacle of Western prosperity and strength.

Unfortunately, we have reached a point—due to the radical transformation of our schools and the rise of the new Left—where our elite institutions are no longer willing or able to defend the very ideas and people that made possible their existence.

In fact, those institutions are leading the charge to bring about this cultural revolution.

Those who do stand up to the statue topplers and radicals—even those who could be broadly defined as “liberal” or on the left—will be drowned out and castigated, will be accused of being racist, and purged by the inquisitors of social justice.

Just look at how the historians who stood up against the inaccurate, flawed, and ultimately destructive “1619 Project” developed by The New York Times have been treated.

The project’s creator, Nikole Hannah-Jones, dismissed her critics as “old white males,” and called others “anti-black.”

The purge and erasure of history require dissent to be silenced. No one may question the narrative. No one may be allowed to freely pursue the truth.

The attacks on history have moved international as well. Statues of Winston Churchill and Abraham Lincoln have been vandalized and defaced by mobs in London.

It’s telling that those were among the primary symbols being targeted.

After all, Churchill and Lincoln in their own ways were leaders who unabashedly stood by the essence of what their countries were in a time of almost overwhelming crisis.

Instead of tearing down Lincoln and Churchill, we must now look to them for inspiration in an uncertain age.

In an address at Bristol University in 1938, the British prime minister-to-be warned that civilization itself was under attack, that it would be tested, and that it would survive only if free people drew on their strength and courage to defend it.

In words striking in the face of our challenges today, Churchill said: “Civilization will not last, freedom will not survive, peace will not be kept, unless a very large majority of mankind unite together to defend them and show themselves possessed of a constabulary power before which barbaric and atavistic forces will stand in awe.”

Will we, like generations before us, answer the call to defend our way of life? Will it be the generation that grew up at the “end of history”—after the Nazi menace was crushed by the arsenal of democracy, the USSR’s evil empire collapsed, and free people stood triumphant—that will cast our hard-won victories aside in an effort to purge our imperfect past?

In an era of mob rule—where the very basis of American and Western civilization is being questioned and attacked from within, and when rising superpowers like communist China that stand in opposition to everything we represent are on the march—it is essential that free people resist the impulses leading to our self-immolation.

The hour is late, and our hot summer days are becoming dark.

Still, imagine what things were like for Lincoln sitting in the White House in 1861 as government of the people, by the people, and for the people appeared to be on the precipice of perishing from the earth.

Imagine how things must have looked for Churchill in the summer of 1940, when darkness was closing in on the last free country on the Continent, the British elite were eyeing capitulation to the Nazi juggernaut, and across the Atlantic the American behemoth was still sleeping.

The times were grim, but leadership and statesmanship in the face of nearly insurmountable challenges held civilization together, allowed free people to rally, gather their strength, and stem the tide of ruin, bringing forth what Churchill called the “bright sunlit uplands” in the era that followed.

Now we are again being called upon to mount a defense of our way of life. We have a great deal to lose and much at stake, because what’s at stake are not just statues and stone, but the freedom of millions alive today and the many more yet unborn.