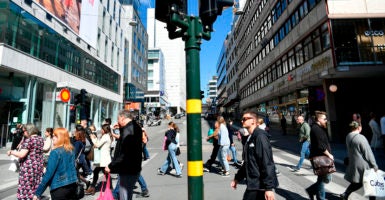 Sweden has been a global outlier, opting against a widespread lockdown but providing health and social distancing guidelines to its citizens. Pictured: The Drottninggatan in central Stockholm bustles on a sunny May 30. (Photo: Henrik Montgomery/TT News Agency/AFP/Getty Images)

Sweden’s less rigid response to COVID-19 came under sharper attack in the past week after having enjoyed popular support. It’s still difficult, however, to judge the success or failure of the policy.

Sweden has had a lower number of new cases of the coronavirus, with fewer deaths than some European countries but still more than its closest neighbors. And it has had more deaths per capita than the United States.

“There has been some movement in public opinion. Previously the Swedish public, based on opinion polls, had been highly supportive of the government’s approach and demonstrated national pride in that they had taken a different approach, unique to Sweden,” Joshua Michaud, associate director of global health policy at Kaiser Family Foundation, told The Daily Signal.

Sweden has been a global outlier, opting against a widespread lockdown but providing health and social distancing guidelines to its citizens.

“It went from 70% approval to less than 50% approval in the past several weeks,” Michaud said of the policy. “You are starting to see Swedish politicians come out against the government’s approach. These are things that we hadn’t seen previously, which seemed like important markers of how the government and society might be thinking about this and whether they might change course.”

In a sign of a politicized split, Ulf Kristersson, leader of the center-right opposition party, the Moderates, criticized Swedish Prime Minister Stefan Löfven on Wednesday over the country’s spiking death rate and what he called inadequate testing, Politico reported.

Sweden’s chief epidemiologist, Anders Tegnell, last week said the country clearly could have done more to combat the virus and protect its most vulnerable populations.

However, Tegnell said that the government strategy—essentially one of achieving large scale immunity by allowing exposure of  the non-vulnerable population—is effective.

“We continue to believe the strategy is good but then there are always improvements one can make, especially if you look back over time,” Tegnell said, according to Reuters news service.

That may be questionable, according to Michaud, if there is a second wave of COVID-19.

Sweden is almost as vulnerable as any other country to a fall wave, as best as I can tell. There may be pockets where you have some level of immunity. On the nationwide scale, even within the Stockholm region, you are probably looking at far less than 20% of people immune. Their expectation has been that there would be 40% or more immunity this month, which hasn’t panned out.

There is a great fear there will be a surge of cases in the fall in the Northern Hemisphere. That might even eclipse what we saw in the first wave in the spring. If that’s the case, Sweden would also be vulnerable. I don’t think they would be protected to a great extent.

‘Too Early to Say’

The data is based on multiple country-specific sources compiled by The Heritage Foundation, Michel said.

“It’s too early to say. They are aiming toward a long-term strategy with the view that the more who get sick, the more immunity,” Michel told The Daily Signal, referring to Swedish officials. “They have done better than some European countries. The data shows the countries are fairly close.”

About half of Sweden’s cases and deaths are concentrated in Stockholm and Vastra Gotaland County, Michel said.

Sweden ranks fifth in the world in deaths per million of population, according to Real Clear Politics’ tracker. The country has 472.7 deaths per 1 million and the total number of deaths is 4,814, according to the tracker.

Belgium actually leads the world in deaths per million, according to the Real Clear Politics numbers, with 843.6. Belgium is followed by the United States with 620.8 per million, Spain with 580.8, and Italy with 565.4.

Data from Google and Apple cellphone tracking records also indicate that Swedish citizens stayed home in large numbers despite the lack of a lockdown order from the government, Kaiser’s Michaud said:

We can see that in Sweden, despite not having a mandated lockdown, people did take measures that are reflected in this mobility data—meaning they stayed home, worked from home more, avoided use of public transportation. The declines in mobility were almost indistinguishable from other countries where government-imposed lockdowns were in place.

To me, that says many Swedes took the recommendations to heart and made changes to their behavior. So that’s one piece of evidence. Swedes have a particular culture and a particular approach that makes that more possible than it might be in other locations. It does go to show that the hands-off approach can lead to behavior changes.

Sweden has increased its testing for COVID-19, Michaud said, and has done more to protect the elderly, including those in nursing homes. However, the government did not act on its stated goal of protecting vulnerable populations, he said, which was a problem.

“Still, they are experiencing high case numbers and high mortality from [the] coronavirus. Certainly much higher than their neighbors. That hasn’t changed much here,” Michaud said.

He said other countries should follow elements of the Swedish approach, such as keeping open-air parks open.

“As we come to know more about the virus, that makes sense given our understanding of the risk involved,” Michaud said. “Having restaurants with outdoor seating available for people is a smart, low-risk thing to do. Having public places and parks, other places people can go to get outside, is a smart thing to do and low risk.”

Sweden also did not close schools, which didn’t turn out to be a problem. The government did, however, close universities.

“At least from Sweden’s experience, and a number of other European countries that reopened schools, it doesn’t look like opening schools or having young kids in day care and schools has led to a major increase or outbreak,” Michaud said.

“So, I wouldn’t go so far as to say schools [should] reopen everywhere. I would say there is some room for taking a nuanced approach to risk, which Sweden seems to have.”

The coronavirus devastated Sweden’s economy, much like the rest of the world, he said.

“Sweden’s economy was impacted. It experienced the highest level of unemployment since the Great Recession, and maybe even more at this point,” Michaud said.

“It may have been less of a contraction compared to where the lockdown was more strict,” he said. “But it was still sizable. Some of that was because there was a global contraction and a regional contraction because of trade and normal commerce between those countries.”