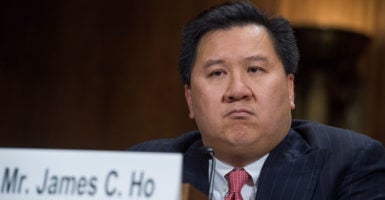 “The right to vote is fundamental to our constitutional democracy. But it means nothing if your vote doesn’t count. And it won’t count if it’s canceled by a fraudulent vote," writes Judge James Ho, pictured during his Senate Judiciary Committee confirmation hearing on Nov. 15, 2017. (Photo: Tom Williams/CQ Roll Call/Getty Images)

The U.S. Court of Appeals for the 5th Circuit has taken federal District Judge Fred Biery to the proverbial woodshed over an outlandish order he issued in late May.

In that order, Biery required Texas to allow all voters to vote by mail even if they didn’t otherwise meet the state’s eligibility requirement for an absentee ballot.

In a stunning June 4 rebuke written by Judge Jerry Smith, a unanimous three-judge panel of the 5th Circuit said that Biery’s order will be “remembered more for [its] audacity than legal reasoning.”

The appeals court panel said that although Biery wanted “to take matters into his own hands,” the spread of COVID-19 has not given unelected federal judges “a roving commission to rewrite state election codes” and intervene just weeks before an election.

The district court suggests that, by requiring able-bodied, young voters who are present in the county to visit the polls in person when they may possibly contract the Virus (notwithstanding doubled early voting and other precautionary measures), the state officials wished ‘to return to the not so halcyon and not so thrilling days of yesteryear of the Divine Right of Kings,’ ‘the doctrine that kings have absolute power because they were placed on their thrones by God and therefore rebellion against the monarch [was] always a sin.’

‘One’s right to vote should not be elusively based on the whims of nature,’ the court opined and therefore, ‘[c]itizens should have the option to’ vote by mail.

Otherwise, according to [Biery], ‘our democracy and the Republic would be lost and government of the people, by the people, and for the people [should] perish from the earth.’

The 5th Circuit panel said, though, that “to resolve this appeal, we need not—and will not—consider the prudence of Texas’s plans for combating the virus when holding elections.  Instead, we must decide only whether the challenged provisions of the Texas Election Code run afoul of the [U.S.] Constitution, not whether they offend the policy preferences of a federal district judge.”

Needless to say, the panel found that the provisions likely did not violate the Constitution, that Texas will likely succeed on the merits of its appeal, and stayed—i.e., blocked—Biery’s order from taking effect.

Still, the 5th Circuit panel continued its strong rebuke of Biery, saying that he was “[n]o stranger to rank speculation” when he “accused Texas of seeking to disenfranchise a certain ‘sector of the population because of the way they [sic] may vote.’”

The appeals court said that this “is an extremely serious accusation that calls into question the judge’s evenhandedness.”

The appellate judges were so troubled by it that they addressed it again later in the opinion and said this is a “grave and malicious accusation for a district judge to make.”

They said, “This kind of drive-by speculation about the state’s covert motives is utterly impermissible and finds no support in this record. Instead of searching for a conceivable basis for the rules, [Biery] jerry-rigged some straw men and proceeded to burn them.”

They summarized their finding saying, “it was not for the district judge to disparage Texas’s response to the Virus and constitutionalize his favored version of the Election Code.”

To justify his opinion, the panel noted, Biery cited (and, we might add, spun for his own purposes) “the Declaration of Independence, the Gettysburg Address, the Bible, and various poems,” none of which are actual sources of applicable law for a federal judge.

While the 5th Circuit panel rebuked and rebutted Biery at nearly every turn in its opinion, the appellate judges took specific issue with two aspects of Biery’s screed: 1) the fact that he gave short shrift to the state’s concerns about voter fraud being more pervasive with the use of absentee ballots, and 2) the fact that he refused to abstain from hearing the case while Texas state law issues were working their way through Texas state courts.

With regards to the former, the appeals court said, “According to the district court, the fact that ‘[b]etween 2005 [and] 2018’—when, of course, far fewer than literally all Texas voters were eligible to vote by mail—‘there were 73 prosecutions out of millions of votes cast’ indicates not that voter fraud is difficult to detect and prosecute, but instead that ‘vote by mail fraud is [not] real.’”

Judge James Ho, a recent Trump appointee, hammered home this point in a compelling concurrence. In it, he discussed a state’s strong interest in maintaining the integrity of its elections.

“The right to vote is fundamental to our constitutional democracy.  But it means nothing if your vote doesn’t count. And it won’t count if it’s canceled by a fraudulent vote—as the Supreme Court has made clear in case after case.”

To further prove his point that states have a compelling interest in protecting the integrity of their elections and the greater likelihood of fraud occurring using absentee ballots, he cited other instances where courts recognized that such fraud occurs.

He even cited data from the Brennan Center for Justice, a liberal think tank that has the explicit goal of making “voting free, fair, and easy” and opposes almost all security measures intended to protect the integrity of the election process, including voter ID requirements.

With regards to the latter issue (abstention), the 5th Circuit panel in a lengthy footnote criticized Biery for refusing to abstain while Texas state law issues worked their way through Texas state courts.

The “district court’s decision to forge ahead despite an intimately intertwined—and, at that time, unresolved—state-law issue was not well-considered.”

The appeals court panel went so far as to say that the “district court’s reasons for not abstaining are suspect,” and that Biery’s refusal to refrain from ruling on an issue being considered by the state courts “turned our jurisprudence on its head.”

The 5th Circuit panel also commented on the irony of the plaintiffs in the case, which included the Texas Democratic Party, telling the appeals court it should “refrain from intervening” in forthcoming elections and refuse to stay Biery’s absurd order because of “the proximity” of the upcoming elections.

That was despite the fact that the plaintiffs had just obtained “an injunction intervening in forthcoming elections” from Biery.

That, said the panel, “reminds us of the legal definition of chutzpah: … a young man, convicted of murdering his parents, who argues for mercy on the ground that he is an orphan.”

Clearly, the conduct of Biery troubled his judicial colleagues. Unfortunately, his conduct isn’t an isolated incident, where judges have behaved in a less-than-judicious—perhaps even partisan—manner when it comes to important election (and other) issues.

The need to depoliticize the courts and to appoint constitutionally committed judges is highlighted by this case.

Fortunately, the 5th Circuit stopped (at least temporarily) Biery’s regal decree from upending Texas’ election procedures, and in the process took a step toward reminding judges to focus on what the law requires, rather than what their own partisan preferences are when it comes to state policies.