What These 6 Black Leaders Told Trump He Needs to Do 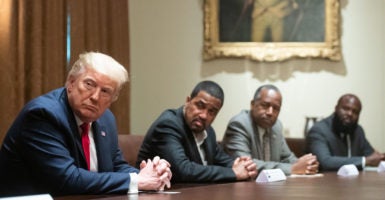 President Donald Trump listens during a roundtable discussion Wednesday with black leaders and influencers at the White House. Pictured with the president, from left, are the Rev. Darrell Scott, co-chairman of the Urban Revitalization Coalition; HUD Secretary Ben Carson; and Ja'Ron Smith, assistant to the president for domestic policy. (Photo: Saul Loeb/AFP/Getty Images)

A half-dozen black leaders and influencers met with President Donald Trump and other administration officials Wednesday to discuss issues of concern to the black community.

Trump held the meeting as issues critical to African Americans came to the forefront in unrest after George Floyd’s May 25 death in police custody in Minneapolis.

“You go down the list of criminal justice reform and all of the things we’ve done—opportunity zones, the best unemployment rate in history just before the plague came in,” Trump said in opening the meeting while news cameras were still there.

Here is what six of the black leaders and influencers had to say at the beginning of the roundtable with Trump and aides in the Cabinet Room of the White House.

After supporting Trump in 2016, the Rev. Darrell Scott said in introducing himself, he has been a liaison between the Trump administration and the black community.

“It’s been one challenge after another, and we’ve pressed pause, but we’re ready to press play now and continue in the positive initiatives regarding the black community,” said Scott, co-chairman of the Urban Revitalization Coalition.

Since then we’ve worked on criminal justice reform, we’ve worked on urban revitalization, prison reform … HBCUs [historically black colleges and universities]—a number of initiatives that are proactive toward the black community. And here we are now, and we’re facing another challenge, and we’re going to come up with some great solutions to these problems that are confronting this country. And I’m just glad to have a seat at the table and to have my input received.

“I’d like to say to all the media assembled here that I wish they would quit lying about what you’ve done, specifically for the black community,” Jackson said, adding:

So you got radical liberal journalists, like Joy Reid from MSNBC, Don Lemon from CNN, [and] Roland Martin, who are putting more poison into the black community than any drug dealer, who are killing more black folks than any white person with a sheet over their face.

How are they doing it? Spreading these lies about the economy you had, Mr. President, before the virus, was the continuation of Obama. That’s just factually not true. I have a degree in accounting. I keep up with the economy. They’re lying.

So to all these folks on MSNBC, CNN, [and] Roland Martin:  What?  Are you afraid to have real black Republicans who know what the hell they’re talking about? If you want to know the truth, if you want us to dissect the Obama economy, let’s do it. And I think, Mr. President, your record would win the debate.

Talk radio host Wayne Dupree noted that he had interviewed Trump on several occasions as a candidate and as president, and originally met him when he was a businessman.

“I’m glad that he has changed things here in D.C.,” Dupree said. “But my daughters and my son and my family, they want to see a lot more positive things coming from the White House.”

“They want to see your leadership, and they also want to see things change for the better in this country. I know you can do it,” he said.

4. Sonnie Johnson: ‘Go Into These Communities’

Talk radio host Sonnie Johnson called herself the “most Trumpish” of the group assembled, and argued that the administration should do even more in what turned out to be the lengthiest early remarks.

“The black community is not doing OK. I understand the perspective and the desire to put out this talking point, but it’s not,” Johnson said. “And I can do it in a simplistic way of just saying: What are the first things you did when you first came into the presidency? The very first thing you did was remove regulation and taxation at high levels.”

The change, she said, gave oxygen to black entrepreneurs.

“Think about the black community that has been under Democratic rule, progressive rule for 60 years,” Johnson said.

Johnson stressed the need for reforming and improving public education as well as policing, and said local governments that preside over major cities need to make improvements to help black residents:

All of these things have been under Democratic control for 60 years, and they are not going to change until you—we—have a Republican Party that is willing to go into these communities and actually offer a choice to these people about how we can do things differently. Because the way it is structured now, the only choice that we get is ‘left’ or either ‘further left,’ and we’re not getting the opportunity to actually vote on what we look at as ‘conservatism,’ equally applied.

“The fake news media spread lies because we aren’t there giving another choice as to how these things can be done,” Johnson said.  “And it’s going to continue to go left if we aren’t there, giving an option to make it go right.”

The president could help push more entrepreneurship among African Americans, she said, recalling how Trump used to be popular among many black celebrities such as rapper Snoop Dogg before he ran for president as a Republican.

Trump nodded as she spoke.

“You saw people that were willing to take a chance and make things grow. That is—that is us. That is the black community,” she said, adding:

I would like to see a challenge from you to see how many in the black community can put their names on the side of a building coming out of this. If we’re really going to reshape and reform the way that we do this, issue that challenge, because that’s what we need more now than ever. And we need it to be focused and [centered] on the black community, not into letting people come in and gentrify areas that are traditionally ours.

Trump’s presidency has “been nothing short of historic for black America,” said Kareem Lanier, co-chairman with Scott of the Urban Revitalization Coalition.

“I don’t say that because I have to, because I can say whatever I want to say as a free citizen here in the U.S.,” Lanier said, prompting some laughter.

He also referred to Trump’s successful championship of criminal justice reform, saying black Americans “were getting locked up at unprecedented rates” as the result of crime legislation championed by President Bill Clinton in the 1990s.

The next goal must be police reform, he said, one day before Trump and Attorney General William Barr convened a meeting on that topic in Dallas.

“Police reform is the gateway to what we see as an unjust criminal justice system sometimes, meaning if a crooked cop doesn’t do a terrible, corrupt thing with an individual, we never get into that bad system,” Lanier said.

Trump, he added, likely could identify with this problem:

This administration has been marred by a crooked cop like [former FBI Director] James Comey and others going after you and … creating things that just were not there. The impeachment was …  just not real, but they can do that. And our community has been affected by that in a way that it’s hard to explain.

“I tell people this all the time. This whole situation with this policing, it’s not new to black people. We’ve been used to it,” he added.

“As a kid, I got harassed by the police all the time and I was a good—I was, I think I was, a good kid,” Lanier said, prompting laughter. “But it was a part of—it’s a part of our community.”

Housing and Urban Development Secretary Ben Carson, who spoke first after the president, touted the historic economic progress for black Americans before the COVID-19 pandemic struck.

“This administration has already established a record of actually solving problems—problems that other people just talk about and then talk about for many years,” Carson said.

“You know, there are some who just wait for anything to criticize it, but there are actually some people who actually want to see a solution,” Carson said. “And I’ve had a chance to talk to many of them. We’ll continue to do that—[to] put forward the kinds of programs that actually get people out of poverty, not things that just keep people stable in poverty and happy in poverty. We want to change that whole dynamic.”

The HUD secretary added that economic growth helps everyone.

“Your philosophy, of course, has been that a rising tide floats all boats,” Carson said to Trump. “And that’s why you don’t spend a lot of time with identity politics. We want everybody to be successful.”