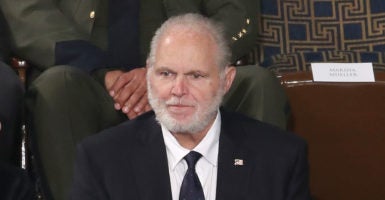 What is important in this continuing debate is not each "side" getting in its talking points but listening to how the other reached the conclusions that created their worldview. Pictured: Conservative radio personality Rush Limbaugh sits in the first lady's box ahead of the State of the Union address in the chamber of the U.S. House of Representatives on Feb. 4 in Washington, D.C. (Photo by Drew Angerer/Getty Images)

Which of the following would you consider the most unusual and least likely to occur?

2. Rioters and looters agree to pay for the damage they caused to businesses and individuals.

No. 3 is the correct answer and it was a fascinating moment.

While it appeared that the hosts and Limbaugh were occasionally talking over each other, the conservative had to earn at least some respect with his forceful denunciation of the killing of George Floyd and his belief that the police officer who killed him should be charged with first-degree, not third-degree, murder.

“The Breakfast Club” hosts, DJ Envy, Angela Yee, and Lenard Larry McKelvey, known professionally as Charlamagne tha God, focused mainly on what they called “white privilege” as the source of misery in much of the African American community. Limbaugh countered that the three were examples of how one can overcome obstacles, including discrimination.

What is important in this continuing debate is not each “side” getting in its talking points but listening to how the other reached the conclusions that created their worldview.

Saying things that only reinforce one’s stereotypes and ideology doesn’t solve the problem, and who doubts there is a problem?

I have written this before, even recently, but the main problem is not only racism. It is that we don’t know each other.

The late Republican Congressman Jack Kemp used to say that as a professional football player he had showered with more African Americans than attend the Republican National Convention. Black people who knew him called him a friend.

Growing up in a virtually all-white Washington, D.C., suburb (a city that practiced segregation well into the 1960s), I didn’t know anyone of a different race, other than a family maid, until I began playing college basketball.

Showering and eating meals with people who were “different” from me bridged a gap that no legislation could span. I came to see them as teammates, friends, equals, and better players than me.

White people have enjoyed privilege from the beginning of the country in almost every category. This includes professional sports, which are now dominated by African Americans, but for many years were not.

I recently again watched the Ken Burns series “Baseball” on PBS and was reminded of how that sport (and others) banned black players from fields and courts simply because they were black.

It is important for white people to acknowledge white privilege and this history of white supremacy before helpful and healing conversations can begin and race relations improved.

Limbaugh also made a political point the hosts were unable or unwilling to answer. He wondered why so many African Americans continue to vote for Democrats when that party, he said, had done little to help them.

Yee responded with the stock answer that she votes for the person, not the party. She should have been asked, “When was the last time you voted for a Republican?”

After “The Breakfast Club” segment was played on Limbaugh’s program, a woman caller offered her definition of white privilege. She said it came from how the country was founded, reserving economic and political power for white, land-owning men.

Some will be surprised that Limbaugh seemed to agree with her. He called her summation “brilliant.” More of us need to have these conversations and not be so eager to get in our talking points. We should speak less and listen more.

“The Breakfast Club” exchange was a good first step toward achieving that goal.