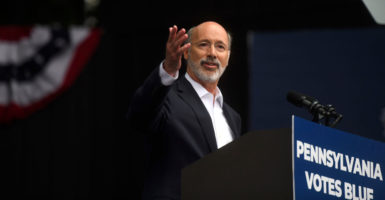 The protests and unrest in response to the tragic death of George Floyd, an African American man who died in police custody last week, and the COVID-19 public health crisis have greatly complicated the work of election officials attempting to conduct honest and fair voting.

If that were not enough, Pennsylvania Gov. Tom Wolf unilaterally amended the state’s election laws hours before primary voters arrived at the polls on Tuesday, only adding to the chaos.

Late Monday evening, Wolf issued an executive order extending the mail-in ballot return deadline in six of Pennsylvania’s 67 counties by an entire week, adding to the list of unexpected changes that have occurred leading up to Pennsylvania’s primary.

Voters in Allegheny, Dauphin, Delaware, Erie, Montgomery, and Philadelphia counties have until 8 p.m. on June 9 to return their mail-in ballots, so long as they were postmarked by June 2. In the remaining 61 counties, voters were still required to return their ballots to their county election office by the close of the polls yesterday.

Wolf claimed that extending the ballot return deadline in those six counties was necessary because of the dramatic increase in mail-voting application requests due to the COVID-19 pandemic and the recent civil unrest and rioting occurring in cities across Pennsylvania.

All six of the counties had municipalities with active states of emergencies at the time the executive order was issued.

Election officials were not given time to prepare for the change, as officials in three of the six counties found out about it from the media or from people calling with questions.

In the days leading up to the election, officials had made decisions regarding mailing ballots to voters that they would have made differently if they had known the governor would change the rules.

Not only did the governor’s executive order blindside election officials, it was also executed without any bipartisan collaboration, which is essential to fair election administration. In fact, Republican leaders were not even made aware of the governor’s intent to extend the ballot return deadline.

Pennsylvania Republican legislative leaders released a statement denouncing the governor’s order, claiming his executive powers do not include the ability to unilaterally amend election procedures without going through the legislative process:

Free and fair elections mean that one person cannot change the rules at the 11th hour. Pure and simple. The founding fathers established a system with checks and balances. Even in an emergency, the General Assembly has an obligation to protect our citizens while defending our democracy.

Republican leaders expressed their concern that the governor’s order undermines public trust in the electoral process and casts doubt on the fairness of the election, especially when six counties are given preferential treatment.

Pennsylvania Republican Party Chairman Lawrence Tabas contended in a statement that “the Governor’s move to change the terms of the election for just six counties violates the U.S. Constitution and the Pennsylvania Constitution, which requires that all laws governing an election must be uniform throughout the state.”

Not only are last-minute changes to election procedures unfair to voters, a lack of uniformity in election laws across the state has the potential to fuel voter confusion and discourage voter participation.

To illustrate the practical implications of Wolf’s order, two voters who live across the street from one another but live in different counties were subject to different voting deadlines.

This preferential treatment of six of 67 counties is detrimental to conducting a fair and honest election.

Navigating last-minute election changes is not only challenging for voters. This executive order adds to the many obstacles that election officials have had to navigate leading up to—and on—Election Day.

This is the first election cycle where voters can request a mail ballot for any reason after legislators recently changed the law to allow for no-excuse absentee voting, and with the COVID-19 pandemic, the number of mail-voting requests has increased to more than 1.8 million, up from 107,000 in the 2016 primary election.

Processing that many absentee ballot applications has presented its own challenge for nearly every Pennsylvania county.

Further, the COVID-19 pandemic has led to a drastic decrease in the number of polling locations around the state.

The reduction of 77% of polling locations in Philadelphia County and 60% in Montgomery County has presented challenges to election administrators attempting to staff those polling locations as well as to voters trying to ascertain where to vote in person on Election Day.

Additionally, officials are tasked with making sure that more than 2,000 new voting machines operate successfully and that votes are properly recorded. In 2019, at least 40% of polling locations reported issues with the new machines, and similar issues were reported on Tuesday.

Last-minute changes to election rules, whether from executive orders like Wolf’s or from court decisions, have the grave potential to undermine the fairness and honesty of elections and the public’s confidence in their fairness.