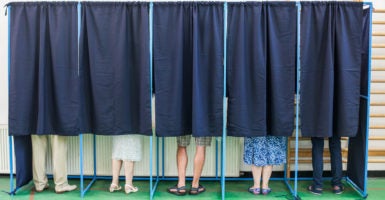 A Pennsylvania election official confirmed Wednesday that noncitizen immigrants illegally voted in elections hundreds of times since 2000, casting doubt on the state’s ability to screen out ineligible voters on its election rolls.

Jonathan Marks, commissioner for Pennsylvania’s Bureau of Commissions, Elections and Legislation, told a state legislative committee that an agency analysis found 544 improper ballots cast from 2000 through 2017.

The hearing comes two weeks after former Pennsylvania Secretary of State Pedro Cortes abruptly resigned amid disclosures that legal resident noncitizens were able to register to vote while applying for or renewing drivers licenses. After inquires from Republican state Rep. Daryl Metcalfe, the Pennsylvania State Department said it had records of 1,160 canceled voter registrations listing ineligibility as a reason and had put the issue under review.

At his testimony Wednesday, Marks said a glitch in the state’s Transportation Department’s “motor voter” process was responsible for the improper voter registrations. He told lawmakers the issue will be fixed within several months, according to the AP.

Republican officials nationwide have for years voiced concern that state election systems are susceptible to fraud and illegal voting by noncitizens and illegal immigrants. President Donald Trump pushed the issue to forefront in May with the creation of an election integrity commission to investigate “vulnerabilities in voting systems” used for federal elections.

Pennsylvania Gov. Tom Wolf, a Democrat, declined to provide some of the information, citing privacy issues and “grave concerns your request is a mere pretense for pursuing restrictions on the fundamental right of citizens to vote.”