We Can Protect Our Health While Preserving Our Civil Liberties 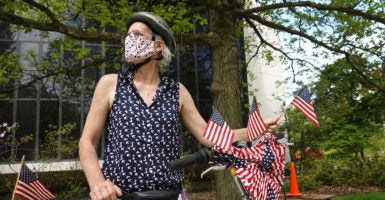 Melony Robbins waits for a small convoy of vintage military vehicles and first responder vehicles to drive by on May 25 in Elmhurst, Illinois. The convoy of about 20 vehicles was arranged as a tribute to fallen veterans after the city canceled the Memorial Day parade as the state continues to grapple with a shelter-in-place order to curtail the spread of COVID-19. (Photo: Scott Olson/Getty Images)

As states nationwide begin the process of reopening, Americans continue to battle over the methods governors and local authorities have used to tackle the coronavirus pandemic.

For instance, some Americans have been pulled over and ticketed for merely driving. One Pennsylvania woman received a $200 ticket for violating Gov. Tom Wolf’s statewide stay-at-home order when she said she had merely gone on a drive to relieve her quarantine restlessness, the York Dispatch reported.

If anything, driving in your own car is a far better method to prevent spreading COVID-19 than, say, using public transportation. As former California state Rep. Chuck DeVore has noted, states with a higher amount of mass transit generally have had a higher number of COVID-19 cases than other states, even taking into consideration urban density.

Perhaps we are lucky that the Green New Dealers didn’t get their wish to end car and air travel and force Americans to switch to rail.

Parks around the country have been shut down, which has rankled many Americans who now struggle to find an outdoor sanctuary at a time when most are trapped inside. Mental health, after all, is a serious concern, as so many people are trapped inside and struggling financially.

And some park crackdowns have been utterly absurd. For instance, police in Brighton, Colorado, arrested a former trooper with the Colorado State Patrol for playing catch with his daughter in a park. The police department later apologized.

Americans are unlikely to tolerate, for long, nonsensical rules or enforcement policies that impede their day-to-day lives. It was, after all, a long chain of large and small abuses by governmental authorities that led to the creation of this country.

And given the Constitution and remarkable political system created from it, we have a great deal of power to end abusive laws quickly.

“But,” he added, “the Constitution is not suspended in times of crisis. We must therefore be vigilant to ensure its protections are preserved, at the same time that the public is protected.”