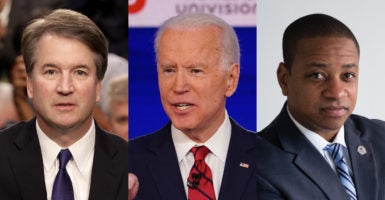 This appears to be the case with how the media has treated the accusations of Tara Reade, who has accused Joe Biden, a former senator and vice president, of sexual harassment and sexual assault.

This treatment is of a piece with how (little) the media scrutinized sexual assault allegations last year against Virginia Lt. Gov. Justin Fairfax.

Reade accuses Biden of sexually assaulting her in 1993, when she worked in his Senate office. Several people have said that Reade told them of the Delaware Democrat’s alleged behavior at the time.

Since early last year, Reade had been vocal about her allegations that Biden treated and touched her inappropriately. Then, on a March 25 podcast, she accused him of sexual assault

Yet little of this story broke into legacy media coverage for nearly a month.

Analysis of the coverage by FiveThirtyEight shows that the story got almost no interest from prominent networks and really received considerable attention only on conservative-leaning websites.

The most that The New York Times editorial board could come up with, while being inconclusive about the Reade allegations, was that further investigation was needed—an investigation put together by the Democratic National Committee.

After months in which this story has festered, Biden finally commented directly about the allegations in a May 1 interview on MSNBC’s “Morning Joe” with co-host Mika Brzezinski, who actually asked some serious and tough questions.

Predictably, many on the left were unhappy even with this level of questioning.

Maria Cardona, a Democratic strategist, wrote that Reade’s accusations simply have been used by Republicans to “weaponize the issue” in an effort to delegitimize the #MeToo movement.

The lack of media scrutiny seems all the more inconsistent with evidentiary standards pushed by the left back in 2011 in the context of sexual assault on campus.

At that time, the Obama administration, in an effort spearheaded by Biden as vice president, issued a “Dear Colleague” letter to college administrators. In it, the Obama administration directed them to adjudicate sexual assault cases under Title IX, a provision in federal law that prohibits discrimination based on sex by institutions receiving financial assistance. The standard there is “preponderance of evidence” rather than “clear and convincing evidence.”

So a college student can have his life destroyed quickly based on fairly thin evidence and nothing like the standards of a trial in court, but a lieutenant governor and a former senator and vice president can just skate on by?

The message, it seems, is that sexual assault allegations are supposed to be “weaponized” only against conservatives.

But in the era of “believe all women,” one would think that at least our putatively nonpartisan press would be quite active in pursuing what could be a big story.

Isn’t the media about bringing truth to power or something like that?

It doesn’t take much to see how differently Biden and Fairfax have been treated by the traditional news media compared to, say, Brett Kavanaugh.

The standard that the left and so many in the #MeToo movement set up is that we must simply believe all women, that presumption of innocence—a cornerstone of American law and concept of justice—is a tool of oppression.

This is certainly what was applied to Kavanaugh, a D.C. Circuit judge whose reputation and nomination to the Supreme Court by President Donald Trump were nearly destroyed by an accusation of sexual misconduct at a high school party some 30 years ago. To date, that accusation has gone uncorroborated by a single witness, or even someone who can confirm that the party took place.

Although I am not addressing the full merits of any of these allegations, I note here that the media nevertheless subjected the nation to a steady barrage of increasingly lurid allegations made against Kavanaugh during his confirmation hearings, passing them along uncritically on such thin evidence that many of them had to be corrected.

With Fairfax and Biden, mainstream media outlets such as The Washington Post, CNN, and NBC News tread slowly and tepidly to investigate. The common thread is that the mainstream media shirked its duty to seriously investigate the truth about a public figure.

The bottom line is, sexual assault allegations should be treated seriously, especially for men and women in power. However, it undermines the media’s credibility when they treat such allegations so differently based on what side of the political spectrum the subject of the allegations is on.

Again, it seems many of these outlets don’t even really try to hide the bias at this point. The only credibility they are concerned with is appealing to predominantly left-wing viewers, colleagues, and institutions while maintaining a thin glaze of “objectivity.”

That’s not inherently wrong. But at the very least, Americans should know what these media institutions are really about and not be deceived into thinking they are the only authoritative word on what the truth is.