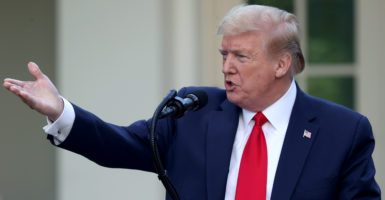 President Donald Trump answers questions during the daily briefing of the coronavirus task force in the Rose Garden of the White House on April 27, 2020, in Washington, D.C. (Photo: Win McNamee/Getty Images)

Asked in the Rose Garden press briefing Monday if the administration would bring lawsuits against states, Trump left the door open.

The Daily Signal first reported Monday that Barr directed federal prosecutors across the country to be on the lookout during the COVID-19 crisis to ensure that state and local governments do not overreach, stating in a memorandum, “the Constitution is not suspended in times of crisis.”

Trump said he read about the memorandum.

“Frankly, the attorney general doesn’t want to have rights taken away,” Trump said. “There are some people not allowed to open up a store. They are going to lose their livelihood. By the way, that causes death also. … The fact that people aren’t allowed to have their freedom causes tremendous amounts of problems, including death.”

Trump administration officials also announced they expected testing for the coronavirus to nearly double in the coming weeks. As of now, 5.4 million Americans have been tested for the disease.

The fourth phase was to galvanize commercial and research laboratories to ramp up testing capacity, followed by facilitating state efforts to utilize all available testing capabilities.

“The FDA has issued 67 emergency use authorizations, which is far outpacing anything that has been done or could have ever been imagined. Galvanizing the research communities in commercial labs—the reason why we are here with ACLA labs, having done about 3 million tests, is because of that day when it was galvanized by the president and the vice president,” Giroir said.

The sixth step was to identify and expand public- and private-sector testing, then strengthen the testing supply chain. The eighth phase was to coordinate with governors and to support testing plans and rapid response programs.

“It was enhancing the production capacity of a small company in Maine called Puritan that you’ll hear a whole lot more about that is sort of the swab provider for the country, but also because of the FDA actions and the actions of the scientific community, [is] being able to broaden the types to spin polyester so U.S. cotton can come in and start delivering within the next couple of weeks 3 million swabs per week of a different type,” the admiral said.

“Whereas we started small with commercial testing partners, you see now that we have 73 of these 2.0 sites, going to 110. Very importantly, this demonstrated the model,” the admiral continued. “And 68% of those sites are in communities of moderate or high social vulnerability and 22% are in the highest social vulnerability communities so that we can make sure the testing gets where it needs to be.”