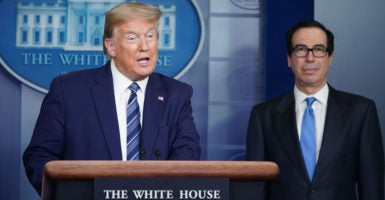 President Donald Trump will sign an executive order on Wednesday to suspend all immigration into the United States for 60 days, with the chance of extensions, as the nation struggles with the coronavirus pandemic and reopening the economy.

“We have a solemn duty to make sure these unemployed Americans regain their jobs and their livelihoods. Therefore, in order to protect American workers, I will be issuing a temporary suspension of immigration into the United States,” the president said Tuesday evening during the daily press briefing on COVID-19. “By pausing immigration, we’ll help put unemployed Americans first in line for jobs as America reopens.”

Trump first mentioned the plan to do so in a tweet late Monday, but offered more details at the briefing. He later added the restriction could go beyond 60 days.

“We must first take care of the American worker. This pause will be in effect for 60 days, after which the need for any extension or modification will be evaluated,” Trump said.

As of Tuesday, the United States has 820,104 confirmed cases of coronavirus and 24,648 deaths, according to the tracker at Johns Hopkins University.

The briefing came just hours after the White House reached an agreement with lawmakers on Capitol Hill for a $484 billion aid package extending a federal loan program for small businesses.

The loans granted under the coronavirus relief program can be forgiven if the firms do not fire their employees. The package also provides money for hospitals and testing for coronavirus.

The treasury secretary was enthusiastic that the loan program would continue, but acknowledged that large employers managed to access the money.

“We have over a million companies that have received this with less than 10 workers,” Mnuchin said. “So, there is very broad participation in really small business. I will comment, there have been some big businesses that have taken these loans. I was pleased to see that Shake Shack returned the money. … The intent of this program was not for big public companies that have access to capital.”

Mnuchin said the Treasury Department is giving companies that were not eligible but applied for loans the benefit of the doubt, and would not impose penalties if the companies paid back the money.

Trump jumped in to say he would request the big companies, including Harvard University, return the money.

“Harvard is going to pay back the money,” Trump said. “They shouldn’t be taking it. Harvard is going to. I’m not going to mention any other names, but when I saw Harvard, they have one of the largest endowments anywhere in the country, maybe in the world.”

Mnuchin said the administration supports a “Phase 4” spending package to boost the economy that will be focused on infrastructure, aid to restaurants, and a payroll tax cut.

Asked later about whether the United States had adequate testing, Trump said, “We have tested more people than any other country in the world.”

During the briefing, Trump also got a question about reports that North Korean dictator Kim Jong Un was facing death.

“I wish him well. We’ve had a good relationship,” Trump said.