Trump Set to Lay Out Plan for Reopening America 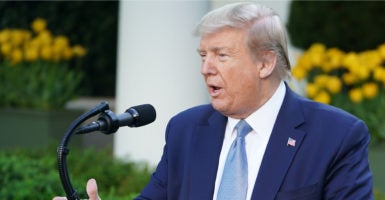 "Some of the states can actually open up before the deadline of May 1," President Donald Trump says Wednesday evening in the Rose Garden of the White House. (Photo: Mandel Ngan/AFP/Getty Images)

President Donald Trump intends to announce guidelines Thursday for states to “reopen” as the nation makes progress against the coronavirus pandemic.

“The data suggests that nationwide we have passed the peak on new [COVID-19] cases. Hopefully, that will continue,” Trump said Wednesday evening in the Rose Garden at the White House. “These encouraging developments have put us in a very strong position to finalize guidelines for states on reopening the country, which we’ll be announcing tomorrow.”

Trump also threatened to use his “constitutional authority” to adjourn both houses of Congress so that he could make recess appointments because Senate Democrats continue to block dozens of his nominations, some of which he said are important in the fight against COVID-19.

Article II, Section 3 of the Constitution grants the president the power, “on extraordinary occasions,” to “convene both Houses, or either of them, and in case of disagreement between them, with respect to the time of adjournment, he may adjourn them to such time as he shall think proper.”

Trump said he and the White House coronavirus task force will brief governors Thursday on the guidelines to reopen the country, then announce them to the public.

The president said the change won’t happen all at once, since each state is different.

“We’ll be opening up states, some much sooner than others,” Trump said.  “We think some of the states can actually open up before the deadline of May 1, and I think that will be a very exciting time indeed. Governors are looking forward, they are chomping at the bit to get going.”

Trump spoke to industry leaders and CEOs earlier Wednesday in a conference call to get feedback on reopening the nation’s economy, among them Heritage Foundation President Kay C. James.

Trump announced Tuesday that James is among influential leaders named to 17 “Great American Economic Revival” groups that he would consult on getting the country back to work.

“I am grateful to work with President Trump alongside economists, scholars, and industry leaders on the Great American Economic Revival,” James said in a prepared statement. “We are committed to developing plans to get Americans back to work as soon as it’s safe to do so and helping the nation recover from COVID-19.”

James, named by the president to the “thought leaders” group, continued:

“Heritage recently formed the National Coronavirus Recovery Commission, bringing together experts in medicine, economics, business, government, disaster relief, and education to develop recommendations to save both the lives and livelihoods of Americans from this pandemic and provide our nation’s leaders with a road map to reopen America when the time comes to do so safely. I am excited to bring those recommendations to the president’s Great American Economic Revival team.”

The U.S. has seen 605,390 cases of COVID-19 and 24,582 related deaths, according to the Centers for Disease Control and Prevention, although Vice President Mike Pence put the death toll at over 27,000 Wednesday evening.

Responding to reporters’ questions, Trump again said that the federal government has the authority to require individual states to reopen. But, he said, he prefers not to take that route.

Pence, a former Indiana governor as well as congressman, has been the president’s point man in communicating with governors.

Still, Pence noted, 24% of all counties in the United States have zero confirmed cases of the contagious disease caused by the new coronavirus that originated in Wuhan, China.

“Sadly, we mourn the loss of more than 27,000 of our countrymen,” Pence said. “Despite the heartbreaking losses, we are getting there, America.”

Rhode Island is getting hard hit by COVID-19 cases that originate in New York City and Boston, even as those cities are seeing a decline, said Dr. Deborah Birx, response coordinator for the task force.

Birx said things are looking up, but offered a sober warning.

“I will just remind the American people again, this is a highly contagious virus. Social gatherings, coming together, there is always a chance that an asymptomatic person can spread the virus unknowingly,” Birx said, adding:

No one is intending to spread the virus. We know if you are sick you will stay home. But to all of you out there that would like to join together and just have that dinner party for 20, don’t do it yet. Continue to follow the presidential guidelines. We really appreciate the work of the American people.