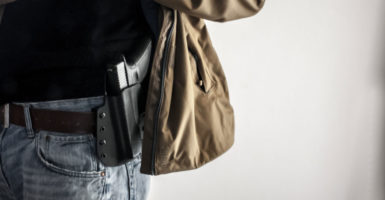 Here are just some of the many times last month when Americans relied on their Second Amendment rights to safeguard their lives and livelihoods. (Photo: Davide Bianco/EyeEm/Getty Images)

As the COVID-19 pandemic sweeps across the country, millions of Americans now live in states where shutdown orders effectively have stripped them of the ability to buy firearms.

Although most states rightly have allowed gun stores to continue operating, a minority deemed them “nonessential businesses” that must close.

Unfortunately, these ordered closures generally have occurred in states where the only way to legally acquire firearms or ammunition is through one of these now-closed stores. People who didn’t already possess firearms now have no means of exercising their fundamental right to keep and bear arms.

This designation of “nonessential” for stores that serve as the critical lifeline for the exercise of fundamental rights is not just of questionable constitutionality, but it comes at precisely the worst time.

Several major police departments have been decimated by COVID-19, with Detroit recently announcing that 20% of its entire police force is in self-quarantine. New York City’s police commissioner said that an unprecedented 5,000 officers called in sick on a single day at the end of March.

As the Centers for Disease Control and Prevention noted in a 2013 report, nearly every major study on defensive gun uses has found that Americans use their firearms in self-defense between 500,000 and 3 million times a year.

In times when law enforcement resources already are stretched thin, it’s even more likely that people will find themselves in situations where the government can’t or won’t protect them.

Last year, The Daily Signal began a monthly series highlighting stories of defensive gun use, which so rarely make serious waves in the media. (Read accounts from 2019 and 2020).

Here are just some of the many times last month when Americans relied on their Second Amendment rights to safeguard their lives and livelihoods, proving just how essential it is that Americans remain able to exercise those rights:

As these examples show, the fundamental right to keep and bear arms continues to play an important role in maintaining “the security of a free state.”

When governors, sheriffs, and mayors deem gun stores “nonessential” and effectively prohibit unarmed Americans from exercising their Second Amendment rights for the first time, they do a great disservice to the Constitution and to public safety.

The good news is that most states have recognized this and refuse to put a moratorium on new exercises of Second Amendment rights. The small minority of states would do well to follow this example.