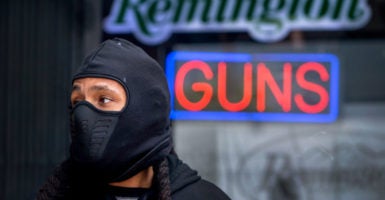 Rapper Ron Deuce waits for a second day to purchase ammunition and a second gun at Gun World in Burbank March 17, 2020, as U.S. sales of guns and ammunition soar amid the coronavirus outbreak. The store had a line down the block. (Photo: Sarah Reingewirtz/MediaNews Group/Pasadena Star-News/Getty Images)

With the COVID-19 pandemic causing serious interruptions to the daily lives of people across the country, many American are acutely aware of how certain civil liberties are being affected by the virus.

But what about the right to keep and bear arms? How is this right being affected by the sudden policy changes?

Here are three things to know about the Second Amendment and COVID-19, the disease caused by the new coronavirus.

1. Americans Are Flocking to Gun Stores. That’s Not Unreasonable.

Millions of Americans have long known that civilian gun ownership plays an important role in the “security of a free state,” allowing us to protect and defend our liberties when the government cannot or will not do so on our behalf.

It’s clear that, in this uncertain and unprecedented time, many more Americans are coming to understand this reality.

Even as stay-at-home orders have devastated many businesses, retailers of guns and ammunition are reporting massive spikes in sales.

That’s hardly surprising or unreasonable, given how the epidemic is affecting police forces around the country.

Several major police departments, including in Philadelphia, have announced that they will no longer arrest individuals for “low-level” crimes, such as vehicle theft and burglary, but will instead simply issue an arrest warrant after the fact.

Even in cities where law enforcement hasn’t altered its practices, many departments are overwhelmed by the disease itself. Detroit recently announced that 20% of its police force is in self-quarantine, while New York City’s police commissioner stated that 14% of the department’s officers—5,000 in total—called in sick on March 29.

That’s all the more concerning, given what history shows us about the public’s response to crises. While states of acute emergency often bring out the best in Americans, they can also bring out the worst.

Consider the 1992 Los Angeles riots, where Koreatown residents and store owners were forced to rely on nothing more than their Second Amendment rights to protect themselves, their loved ones, and their livelihoods from widespread rioting and looting.

Similar situations occurred during the 2015 unrest in Ferguson, Missouri, where stories emerged of armed civilians defending their businesses when the National Guard was told to stand down.

Our system of federalism means that states, not the federal government, have a lot of control over their individual responses to the COVID-19 epidemic.

Many states have imposed “stay-at-home” orders to help fight the spread of the disease, sometimes with the Second Amendment rights of residents hanging in the balance.

A handful of states, among them Ohio, Illinois, Indiana, and Michigan, have deemed gun stores “essential businesses” that are exempt from mandatory closures, just like pharmacies, grocery stores, and gas stations.

The Texas attorney general also issued an opinion that local governments can’t use the declared state of emergency to close down gun stores or otherwise infringe on Texans’ Second Amendment rights.

Other states, however, have not exempted gun stores. Some of those states, such as New York and Massachusetts, require all gun sales and transfers to go through licensed dealers, so residents are effectively unable to acquire firearms during the state of emergency.

Finally, some states have taken compromise approaches. Virginia, for example, has not listed gun stores among essential businesses, but they are not among those nonessential businesses ordered to close. Instead, gun stores must abide by social distancing limitations on the number of patrons inside the business at any one time.

Gun ranges, however, are considered “indoor public amusement” like movie theaters and bowling alleys, leaving gun owners with few options for developing critical marksmanship skills for the duration of the order.

Despite deeming marijuana dispensaries and alcohol retailers as essential, California has left it up to individual counties to make the determination regarding gun stores.

While some sheriffs have insisted that they will allow gun stores to remain open in their counties, the sheriff of Los Angeles County—the state’s most populous—initially ordered them to close.

The federal government, for its part, issued official guidance on March 28 that deemed gun stores, firearms and ammunition manufacturers, and gun ranges as “critical components of the nation’s workforce.” As such, the guidance recommends that states allow those businesses to continue operating even in states of emergency.

Although the guidance is not a mandate for the states, it does help bolster the strength of legal challenges to state closures. New Jersey and Los Angeles County have since walked back their original closures of gun stores, citing the federal guidance.

Unfortunately, another big issue with local responses to COVID-19 has been the shutting down of law enforcement services deemed “nonessential,” including those for processing concealed carry or handgun permits.

If you are one of the many Americans now considering buying a gun for the first time, there are several very important things you should do beforehand to help ensure you are a responsible gun owner.

First, familiarize yourself with your state’s gun laws. Every state has different laws about who can purchase what types of firearms and what procedures they must follow.

Some states have a mandatory waiting period for all gun purchases, meaning that after you go to the store, pass a background check, and pay for the firearm, you must wait for a certain number of days before the gun store can actually transfer the gun. In California, for example, it will be a full 10 days before you can bring your purchased firearm home.

You should also familiarize yourself with safe storage laws, which some states use to govern how your firearm must be stored under certain circumstances. Similarly, states have different self-defense laws, as well as different laws regarding the carrying or transportation of firearms in public.

Second, before purchasing a gun, think through important questions about gun ownership.

Perhaps the most vital of those questions is whether you are comfortable with using lethal force in self-defense. If you don’t think you could pull the trigger should your life depend on it, there are plenty of nonlethal alternatives for self-defense you might wish to consider instead.

Third, train with your firearm soon and often. You don’t want the first time you fire your gun to be when your life is on the line.

If you live in a state where stay-at-home orders make firearms classes or range training impractical for the near future, groups such as the National Rifle Association and the National Shooting Sports Foundation have a plethora of free resources available online. Consider using those resources and learning what it takes to practice responsible gun ownership.