11 Examples of Bloomberg’s Folly on Defensive Gun Use 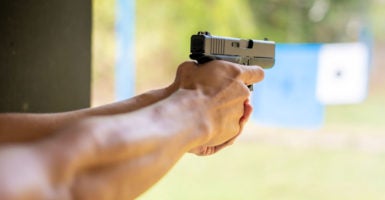 Every day, many Americans without Michael Bloomberg’s wealth and power rely on the Second Amendment—not private security—to defend themselves against threats to their lives and livelihoods. (Photo: Thanakorn Phanthura/EyeEm/Getty Images)

Earlier this month, former New York City Mayor Michael Bloomberg was asked how he justified his push for more stringent gun control when he is guarded by an armed security detail.

Bloomberg’s response? He is a wealthy businessman and politician who faces threats that normal Americans do not, so it’s just fine for him to pay others to protect him with guns that he’d put the rest of us in prison for possessing.

The reality is that Bloomberg, as a wealthy white man living in upper-class neighborhoods, is statistically far less likely to be a victim of violent crime than most other Americans.

But you’d never know it from the way he spends hundreds of millions of dollars advocating gun laws that reserve armed protection for the special few.

Every day, many Americans without Bloomberg’s wealth and power rely on the Second Amendment—not private security—to defend themselves against threats to their lives and livelihoods. In fact, almost every major study on defensive gun use has found that Americans use their firearms defensively between 500,000 and 3 million times each year.

Last year, The Daily Signal began a monthly series highlighting just some of the countless times that the right to keep and bear arms made all the difference for ordinary Americans whom Michael Bloomberg wants to disarm. (You can read the stories from January 2020 here.)

February similarly provided ample evidence in favor of an armed citizenry and against Bloomberg’s claim that only the select few can be trusted with guns.

Michael Bloomberg is more than wealthy enough to afford to pay armed men to protect him. Most Americans are not so fortunate.

We don’t have former law enforcement officers on hand when the convenience store we’re in gets robbed. We can’t rely on an armed detail to jump to our defense when we’re assaulted. We don’t live in gated communities with 24/7 security.

We have only our Second Amendment rights. And they are worth insisting upon.