How Capitalism Is Helping US Defeat COVID-19 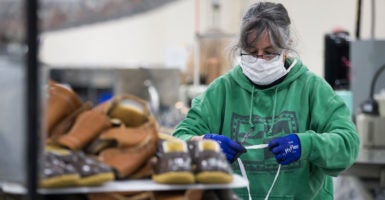 Masks are produced by the L.L. Bean plant in Brunswick, Maine, on March 30. L.L. Bean started producing safety masks with a strictly volunteer workforce during the COVID-19 epidemic. (Photo: Blake Nissen for The Boston Globe/Getty Images)

In times of crisis, Americans don’t look just to the government to save the day.

In certain intellectual circles in the United States it’s become fashionable to decry free markets, laying every economic woe of any American at the feet of “late stage capitalism,” the buzzword used to decry any business practice that seems designed to promote big business over the little guy.

But right now, as our nation struggles to deal with the coronavirus, we’re seeing proof our American companies are stepping up and helping. Businesses, big and small, are trying to do their part to help the U.S. defeat COVID-19. Just consider these examples:

—MyPillow CEO Mike Lindell announced last week that 75% of his company’s production will be converted to making face masks.

—AK Wet Works in Seabrook, Texas, a small business that makes industrial painting and coating products, is now using its specialty to sanitize public places and other businesses. “We actually came to the idea of, why can’t we take our blast pots and actually create a vapor that can be mixed with a disinfectant, so we can actually sterilize things around us,” operations manager Dennis Hotz told KTRK-TV, Houston’s ABC affiliate.

—The Young & Yonder distillery in Healdsburg, California, is now making hand sanitizer and giving it to customers who come in for to-go pickups. “The community has been incredible. Most people who came in also picked up a bottle or two of spirits,” said Sarah Opatz, who founded Young & Yonder with her husband in 2013, according to The Press Democrat newspaper of Santa, Rosa, California. “It’s kept our business alive and growing. … We just wanted everybody to stay clean. We had the supply and ingredients.”

—General Motors, Ford, and Tesla are ramping up production of much-needed ventilators.

Helen Raleigh at The Federalist compiled an excellent rundown of some of the other businesses that have stepped up during this crisis, including fashion companies that will switch over to making masks by the millions and drugstore chains, among them CVS and Walgreens, that are opening up mobile COVID-19 testing sites.

A coalition of CEOs launched the “Stop the Spread” initiative to organize businesses to address the specific needs of society during the COVID-19 pandemic.

Brooks Brothers, which normally makes suits and clothing, will produce masks and gowns. Flex Ltd., a supply chain and manufacturing company, is ramping up production of ventilators and protective equipment. Many other companies are joining in.

Parkdale Mills Inc. has joined efforts with a team of textile manufacturers to ramp up production of face masks and other similar materials.

“This is … a time of crisis that many people have not seen since the time of the world wars, Vietnam, you know, situations like that,” a Parkdale Mills spokesman said in an interview with The Daily Signal on Wednesday. “And [in] these times, there is a call to action. Who is going to step up and supply a need and do the right thing? We are trying to do the best we can to do what we can for the country.”

Perhaps just as importantly in this time of stress and deep uncertainty, innumerable businesses are doing what they can to give additional aid to employees, many of whom are facing the prospect of losing their jobs and salaries.

The owner of Federico’s Pizzeria & Restaurant in Belmar, New Jersey, is dealing with a lockdown in the state by opening up a $50,000 line of credit to continue paying employees.

“It just seemed like the right thing to do,” Bryan Morin, the owner of the pizzeria, said on “Tucker Carlson Tonight” on the Fox News Channel. “I didn’t want them to worry about me paying my mortgage. I didn’t want these guys … [to] have to worry about paying their rent, their utilities, and insurance, and other stuff.”

The restaurant can still do deliveries, but the potential for employees to get sick and end up in quarantine remains high.

“I just took this [line of credit] out to guarantee that my employees, no matter what, they’ll continue to be able to pay their bills. You’ve got to take care of your employees,” Morin said. “Without your employees, you don’t have a business.”

Smuttynose Brewing in Hampton, New Hampshire, has been forced to close and only do deliveries, but it’s decided to retain and pay all of its full- and part-time staff through the pandemic.

“We feel this was an extremely important decision,” Andrew Hart, Smuttynose director of hospitality, said, according to Seacoastonline. “There is a lot of uncertainty here, and we are in a unique and fortunate position where we are able to financially take care of our employees the best we can.”

There are numerous other stories like this around the country as businesses and employees are doing their best to weather the storm.

The total shutdown of the American economy has few—if any—precedents. If anything, the closest comparison is to World War II, where practically the entire economy was devoted to the war effort in one way or another.

During that war, the power of American government was certainly expanded, as it is now during the COVID-19 coronavirus pandemic. But America’s strength in war, or at any other time, is not in the power of its government.

The genius of the U.S. war effort was that, rather than relying on the government to fulfill the needs of the nation, the government merely acted to marshal resources to the front lines. Otherwise, the country relied on the surge of private production and the natural inclination of Americans in a crisis to devote all of their energy to tackle the challenge.

As they did in the 1940s, countless businesses, large and small, are now stepping up to aid both in combating the invisible enemy and in helping Americans who are hurting physically and financially at this time.

This is in part the genius of a free market system and why it’s ultimately more successful than, say, socialism. Businesses and free people can quickly respond to the needs of society.

When the need is great, their response is greater and far more efficient than a government-controlled system could ever be. In moments of national crisis, that great and good American system shines through.

During World War II, the auto industry switched production from cars to tanks, planes, and other weapons of war. The results were remarkable.

Edsel Ford, who ran the Ford Motor Co. at the time, vowed that the automaker could produce a bomber an hour at the Willow Run production facility in Michigan, which it did in 1944. It was an incredible achievement.

Today, Ford is making a similar switch in production—not to bombers, but to ventilators to care for COVID-19 patients. Ford is partnering with General Electric to produce 50,000 ventilators in 100 days, according to The New York Times.

“Just as Ford in the last century moved its manufacturing might seamlessly from auto to tank production during World War II, the Ford team is working with GE Healthcare to use its awesome engineering and manufacturing capabilities to voluntarily help this nation solve one of its most pressing problems,” the White House’s Defense Production Act coordinator, Peter Navarro, said in a statement.

There will be plenty in this time of crisis who claim that socialism or other radical solutions are the answer to what ails us in this moment. Some, like Jacobin Magazine, are calling for the nationalization and government takeover of Amazon and other companies.

But Amazon and Walmart, truckers and grocers, and the countless hard-working people who comprise our remarkable supply chain have been keeping the nation fed as the government struggles to meet its basic requirements in this pandemic.

Though many may take this time to attack our generally free market economy, the reality is that even as businesses and industries are decimated, our eventual turnaround will rely on the ingenuity of Americans across the country to reboot when the coronavirus pandemic passes.

It’s time to ignore the haters. Defeating COVID-19 requires joint efforts from both government and businesses—as well as communities and individuals. Private enterprise, as was the case in crises of the past, will play an essential role in getting America back on its feet.