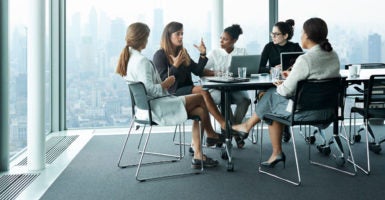 Once we account for relevant factors for which we have reliable data, the wage gap between women and men all but disappears. (Photo: Klaus Vedfelt/Getty Images)

Both men and women are gravely affected by the surge in unemployment due to measures aimed at containing the spread of the novel coronavirus in the United States.

Pitting men and women against each other with simplistic statistics about a gender wage gap needlessly adds to the real pain.

Tuesday, March 31, is a fairly random day selected as “Equal Pay Day” by the National Committee on Pay Equity to draw attention to the difference in the median annual earnings of all men and women working full time for wages or a salary.

According to the committee, the date “symbolizes how far into the year women must work to earn what men earned in the previous year.”

To the extent that implies that women get paid less than men for doing the same work, that representation is just plain wrong.

According to data from the Bureau of Labor Statistics, in 2018, women who were full-time wage and salary workers had median weekly earnings of 81% compared with men.

It provides no answers to the question of whether men and women receive equal pay for equal work.

To answer that question, we need to dig deeper and consider a number of factors that determine pay, including the number of hours worked, occupations and industries, education, experience, and tenure, and the distribution of benefits-to-cash compensation.

Once we account for relevant factors for which we have available and reliable data, the wage gap all but disappears.

To the extent that we observe differences between men and women in the workplace, many of those differences come down to the different preferences and choices individuals make—with the starkest differences observed for working mothers, compared with both working men (fathers included) and women.

Some of those differences include:

And yet, we observe differences in compensation even when men and women work in the same job and under completely identical compensation structures.

A study examining the earnings of male and female bus and train operators for the Massachusetts Bay Transportation Authority identified that women earned 89% of what men earned, concluding that “while having the same choice sets in the workplace, women and men make different choices.”

[W]omen chose to work only half as many overtime hours—80 hours per year, compared with 160 hours for men. Women also took an average of 17.5 days of unpaid leave (often to avoid undesirable schedules) … compared with 10 days of leave for men.

Women and men have different earnings in large part because of the choices they make about how much to work, in which jobs and industries to work, and which aspects of a job are important to them.

Some of those choices are likely influenced by social and cultural factors and the opportunities we encounter, based on the environments in which we are born and raised.

The good news is that in the United States today, men and women are paid based on the contributions they make and the wages and working conditions they are able to negotiate, rather than based on their sex.

As the nation confronts the novel coronavirus threat, we should remember that we are all in this together. Both men and women are best served by a strong economy that provides them with opportunities to work and provide for their families, in accordance with their own values and abilities.

The economic disruptions experienced by millions of workers due to necessary measures to slow the spread of the novel coronavirus know no sex.