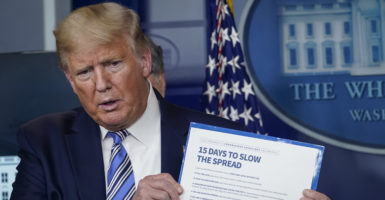 A chief line of attack during the coronavirus crisis from former Obama administration officials and leading Democrats is that President Donald Trump shut down a White House office on pandemics that might have stopped COVID-19 from spreading—or at least alleviated the threat.

The attack is based on a 2018 decision by then-national security adviser John Bolton to reorganize the White House’s National Security Council.

But the top National Security Council official at the time of the change stressed that no office was closed.

“We consolidated three directorates into one,” Tim Morrison, former senior director for counterproliferation and biodefense on the NSC, told The Daily Signal in a phone interview. “This eliminated layers in the reporting chain and in the accountability chain.”

The National Security Council is made up of officials detailed from other agencies, primarily the Defense Department and the State Department. Part of the NSC’s mission is to identify emerging threats and inform the president and Cabinet officials about options.

The accusation that Trump got rid of a pandemic office is among the left’s politicized attacks on the White House since the coronavirus outbreak began. The administration assembled a coronavirus task force run by Vice President Mike Pence to address security and medical issues.

President Barack Obama closed the White House Health and Security Office in 2009, according to The Washington Post. But after the emergence of the Ebola virus in 2014, the Obama administration opened the Directorate for Global Health Security and Biodefense as part of the NSC.

The move was based on what Bolton believed would be a natural overlap. Not a single staffer lost his position, according to Morrison, now a senior fellow specializing in Asia-Pacific security at the Hudson Institute.

As Democrats asserted that Trump closed the office and Republicans said he hadn’t, The Washington Post left-leaning Fact Checker column looked into it and did not make a ruling, stating:

One can see the dueling narratives here, neither entirely incorrect. The office—as set up by Obama—was folded into another office. Thus, one could claim the office was eliminated. But the staff slots did not disappear and at least initially the key mission of [the] team remained a priority.

He told The Daily Signal that if anything, the combined structure had more clout and ability to inform the president than the previous office had.

However, amid the coronavirus pandemic, that hasn’t slowed Trump critics’ politicizing of the matter.

Ron Klain, the Democratic political operative who Obama named as his Ebola response coordinator, said in a video message that Obama’s White House set up a permanent pandemic prevention response office at his urging.

“That office was doing a great job. But in 2018, Donald Trump abolished that office,” Klain said. “So, when the coronavirus hit our country, no one on the National Security Council staff was put in charge.”

Aside from the fact that no related White House office actually was shut down, Morrison noted, the international climate was much different in fighting Ebola.

“During the Ebola response, we had a vaccine and the government of Congo worked with us, not blocking us at every turn as the government of China has,” Morrison said. “Our national security strategy with China has improved in that it’s military, political, and economic.”

Not all calls for restoring a single pandemic office were rooted in politics. In November, a study by the Center for Strategic and International Studies suggested restoring the office before the coronavirus threat was known. It states:

The U.S. government should re-establish a directorate for global health security and biodefense on the National Security Council (NSC) staff and should name a senior-level leader in charge of coordinating U.S. efforts to anticipate, prevent, and respond to biological crises. These actions will ensure that the necessary leadership, authority, and accountability is in place to protect the United States from a deadly and costly health security emergency.

Beth Cameron, who had served as senior director for global health security and biodefense with the Obama administration’s NSC, complained in a Washington Post op-ed wth the headline: “I ran the White House pandemic office. Trump closed it.”

“Biological experts do remain in the White House and in our government,” wrote Cameron, now vice president for global biological policy and programs at the Nuclear Threat Initiative. “But it is clear that eliminating the office has contributed to the federal government’s sluggish domestic response.”

But Morrison, who ran the NSC directorate that included pandemics under Trump, notes that the increased testing for COVID-19 in South Korea is not entirely comparable.

“The U.S. and South Korea are very different. South Korea is a small, urbanized, more homogeneous population,” Morrision told The Daily Signal. “Their ports of entry are much smaller and easier to control.”

Regardless, Carafano contends that the NSC would have a minor role in fighting the coronavirus anyway.

“The NSC doesn’t play a real aggressive role in pandemic responsibility,” Carafano told The Daily Signal. “It’s there to coordinate operational activity. For example, if a hurricane hits, the NSC would have an advisory role, but it would be minor.”

The Federal Emergency Management Agency “would take the lead” in a natural disaster such as a hurricane, he said, while the Department of Health and Human Services would do so in a pandemic.