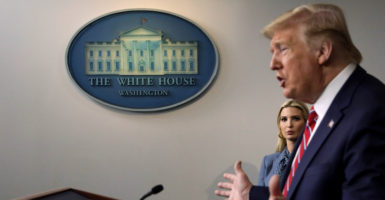 President Donald Trump speaks as his daughter and senior adviser Ivanka Trump looks on during a news briefing on the coronavirus outbreak. (Photo: Alex Wong/Getty Images)

At least two entities financed through the left-wing organization Arabella Advisors have launched campaigns politicizing the pandemic, according to the conservative watchdog group Americans for Public Trust.

“This is a dark-money organization that is taking advantage of a crisis,” former Nevada Attorney General Adam Laxalt, outside counsel for Americans for Public Trust, told The Daily Signal, referring to Arabella Advisors.

Laxalt said that it’s not clear how much has been spent to attack President Donald Trump over his measures to fight COVID-19, the disease caused by the new coronavirus.

An ABC News/Ipsos poll this week found Trump had a 55% approval rating for his handling of the coronavirus pandemic, with 43% disapproving.

Arabella Advisors describes itself as a philanthropic consulting firm that manages its own nonprofits for “fiscal sponsorship and project incubation” of other initiatives.

Pacronym is associated with the liberal nonprofit Acronym, which is financed by the New Venture Fund, a major Arabella Advisors-sponsored program.

Acronym’s founder and CEO, Tara McGowan, was part of President Barack Obama’s 2012 reelection campaign. Acronym also was involved in the technology problems last month that crippled the results of the Iowa Democratic caucuses.

Arabella Advisors sponsors the Sixteen Thirty Fund, which gave $200,000 in 2018 to American Bridge, a nonprofit run by David Brock, a conservative journalist-turned-liberal activist.

American Bridge launched an ad campaign in Michigan, Wisconsin, and Pennsylvania attacking “Trump’s incompetence” in responding to the coronavirus, The Washington Post reported.

Another Sixteen Thirty Fund group, known as Protect Our Care, has run ads attacking the response to the virus by Sen. Steven Daines, R-Mont.

Arabella, Pacronym, and American Bridge did not respond to inquiries from The Daily Signal on Thursday and Friday.

As of Friday afternoon, the United States has 15,219 confirmed cases of COVID-19 and 201 deaths resulting from the coronavirus, according to the Centers for Disease Control and Prevention.

On Twitter, Arabella Advisors projected a far more mainstream approach to the coronavirus:

Neither the Sixteen Thirty Fund nor the New Venture Fund has active Twitter accounts.

Laxalt, a Republican who lost a race for Nevada governor in 2018 and was that state’s attorney general from 2015 to 2019, said he understands that everything gets politicized today. But, he argued, COVID-19 presents an extraordinary circumstance.

“Maybe in eight weeks, maybe even in four weeks, this would be acceptable,” Laxalt said. “Now, it’s out of step at a time when the American public needs to unify.”