White House to Restrict Travel Across Both Borders 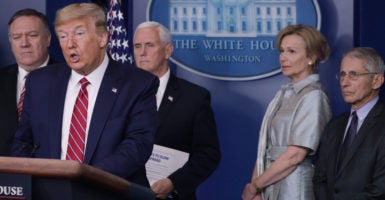 President Donald Trump announced Friday that he is closing both the southern and northern borders to curb the spread of the coronavirus, effective Saturday.

“As we did with Canada, we are working with Mexico to implement new rules at ports of entry to suspend nonessential travel,” the president said, flanked by administration officials for the daily briefing on the government’s response to the COVID-19 pandemic.

“All of those measures that we are putting in place will protect the health of all three nations and reduce the incentive for a mass global migration that would deplete the health care resources needed for our people,” Trump said, adding: “Every week, our border agents encounter thousands of unscreened, unvetted, and unauthorized entries from dozens of countries. And we’ve had this problem for decades–for decades.”

As of Friday afternoon, the United States has 15,219 confirmed cases of COVID-19 and 201 deaths resulting from the coronavirus, according to the Centers for Disease Control and Prevention.

Health and Human Services Secretary Alex Azar said the government is applying Section 362 of the Public Health Service Act to suspend entry into the United States of those who could pose a public health threat.

Azar noted that the United States and Italy became aware of the coronavirus about the same time. But the U.S. banned entry of travelers from China, and later Iran and Europe, so the U.S. hasn’t been overwhelmed as Europe has, he said.

Secretary of State Mike Pompeo worked on the agreements with Canada and Mexico. The agreement was in place with Canada, then completed with Mexico.

“The United States and Mexico have agreed to restrict nonessential travel across our shared borders,” Pompeo said. “Both our countries know the importance of working together to limit the strength of the virus.”

Chad Wolf, acting secretary of the Department of Homeland Security, stressed that a “secure” and “strong ” supply chain will continue to move across both borders.

“Let me be clear that none of these agreements apply to lawful trade or commerce,” Wolf said. “Essential commercial activities will not be impacted.”

Among notable fireworks during the briefing, Trump got in a spat with NBC News reporter Peter Alexander.

Alexander asked: “Is it possible that your impulse to put a positive spin on things may be giving Americans a false sense of hope?”

“No, I don’t think so. It may work. It may not work. I feel good about it,” Trump said, referring primarily to the use of a proven malaria drug to treat COVID-19 that the Food and Drug Administration announced Thursday.

Trump went on to slam Comcast, the parent company of NBC and the highly charged anti-Trump cable channel MSNBC.

“The American people are looking for answers and looking for hope, and you’re doing sensationalism, and the same with NBC and Con-cast. I don’t call it Comcast, I call it Con-cast,” the president said.

Trump and administration officials have sought to advise Americans to remain calm and listen to the guidance of public health officials, including those at the Centers for Disease Control and Prevention.

Later, Alexander asked Vice President Mike Pence: “What do you say to Americans who are watching and who are scared?”

Pence responded, calmly: “I would say, do not be afraid. Be vigilant.”

The vice president, who is heading up the White House coronavirus task force, went on to address basic precautions that Americans should take and said the “whole of government” is responding.