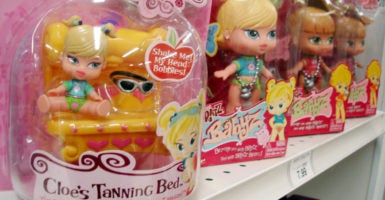 “I was inspired to introduce this bill,” Low said, after the third-grader of one of his staffers asked, “‘Why should a store tell me what a girl’s shirt or toy is?'”

If Low’s bill becomes law, any big retail store that doesn’t comply would be staring down a $1,000 fine. Starting in 2023, AB 2826 would order any company with more than 500 employees to leave the days of pink and blue behind.

“Britten’s bill,” Low argued, “will help children express themselves freely and without bias.”

Unfortunately for the Democrat, who represents parts of the South Bay and Silicon Valley, not a lot of California parents agree.

Candice Miller, who was visiting the Central Coast, told KSBY News: “We want to raise our daughter to know she’s a girl. That’s how she was born, [and] that’s how she will live … ”

The same, she said, goes for her sons.

As far as Low is concerned, “keeping similar items that are traditionally marketed either for girls or for boys separated makes it more difficult for the consumer to compare the products and incorrectly implies that their use by one gender is inappropriate.”

Other parents disagree. Running errands is hard enough without the headache of chasing down things in politically correct departments. Besides, most residents want to know, doesn’t California have better things to do than regulate its stores’ layouts?

At the U.S. House last week, the issue wasn’t keeping girls’ and boys’ merchandise separate, but girls and boys themselves.

During a hearing over appropriations, Housing and Urban Development Secretary Ben Carson got into a fiery exchange over the agency’s commonsense policy on homeless shelters.

For months, the HUD secretary has explained that his agency’s return to the law’s definition of “sex” has nothing to do with respecting persons or treating them equally:

[We] obviously believe in equal rights for everybody, including the LGBT community. But we also believe in equal rights for the women in the shelters … [W]e want to look at things that really provide for everybody and [don’t] impede the rights of one for the sake of the other … There were some women who said they were not comfortable with the idea of being in a shelter, being in a shower, [with] somebody who had a very different anatomy.

During the hearing, Quigley tried to twist that reasonable justification into an attack on people who identify as transgender.

Carson basically was saying, he argued, “[that] if someone doesn’t like someone else in that shelter, for whatever reasons, that you can allow discrimination against those people.”

“No,” Carson fired back. “What I’m saying is we have to take everybody’s feelings into consideration. You can’t just select a group and say that their feelings trump everyone else’s groups.”

Unfortunately, in this era of cultural confusion, that’s what any number of people are saying—including, it turns out, one small-town school in Minnesota.

The kids eating at Marshall Middle School’s cafeteria have been experiencing heartburn over the rainbow flag that’s still hanging defiantly by the U.S. flag.

Despite a petition asking administrators to take the display down, the school has stubbornly stuck to its guns—refusing even to let other flags like the yellow “Don’t Tread on Me” to join the collection.

After some testy school board meetings, parents have turned to the Thomas More Society for help. Special counsel Erick Kaardal sent a pointed letter to the school, reminding officials that the building is funded by public tax dollars.

“Whether this was an inappropriate decision by a staff member,” Kaardal explains, “or a deliberate violation of students’ rights, this is a serious matter. It is incumbent upon school officials to write and enforce rules that prevent the public school from being turned into a forum for the display of a single ideology. As members of the academic community, these administrators should understand that you cannot trample on the right to free speech.”

“At the very least,” he argues, “it’s divisive and insensitive. It makes it appear that the school supports one group’s beliefs at the expense of others.”

“If a federal lawsuit is needed to make this happen,” he says, “we are equipped to pursue that action.”