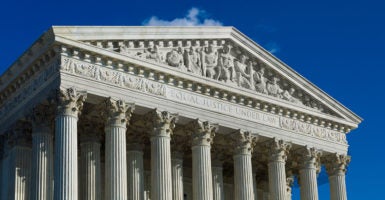 In a tight 5-4 decision, a majority of justices on the Supreme Court ruled that there is nothing in federal immigration law that forbids state prosecutors from going after illegal aliens who used false or stolen identification. (Photo: Walter Bibikow/Getty Images)

The Supreme Court ruled on Tuesday that state governments can prosecute illegal aliens of identity theft, including aliens who use false Social Security numbers to unlawfully gain employment.

In a tight 5-4 decision, a majority of justices on the nation’s highest court ruled that there is nothing in federal immigration law that forbids state prosecutors from going after illegal aliens who used false or stolen identification.

The case revolved around interpretation of the Immigration Reform and Control Act (IRCA), which makes it a federal crime to lie on employment authorization forms.

While liberal justices on the Supreme Court argued that immigration-related employment fraud is a federal matter, conservatives found that aliens can be also subject to criminal prosecution by states if they use someone else’s information.

“Although IRCA expressly regulates the use of I–9’s and documents appended to that form, no provision of IRCA directly addresses the use of other documents, such as federal and state tax-withholding forms, that an employee may complete upon beginning a new job,” wrote Justice Samuel Alito on behalf of the court’s majority.

The individuals—Guadalupe Ochoa Lara, Ramiro Garcia, and Donald Morales—were not authorized to work in the U.S., so they gave their employers false Social Security numbers.

The state Supreme Court found that the Immigration Reform and Control Act prohibited states from prosecuting such cases as they were solely federal matters.

Kansas, however, countered that the prosecutions were not related to immigration, and that such an interpretation would undermine its capability to fight identity theft.

“This ruling provides much-needed clarification on how preemption works in immigration law,” said Dale Wilcox, the executive director and general counsel of the Immigration Reform Law Institute, a group that promotes tighter restrictions on immigration.

“While sanctuary laws violate the Supremacy Clause because they block federal enforcement, there is no violation when state actions advance federal purposes,” Wilcox continued. “The Court was correct to recognize that though states may not hinder, they are free to help.”

The court’s liberal bloc—Justices Stephen Breyer, Ruth Bader Ginsburg, Sonia Sotomayor, and Elana Kagan—filed an opinion concurring in part and dissenting in part of the decision.