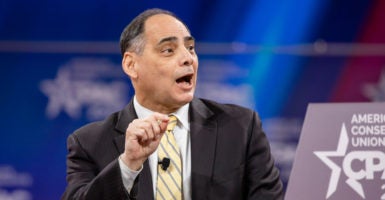 China wants to use artificial intelligence and 5G technology to “control the world” and undermine human rights, a Heritage Foundation national security analyst said Friday during an annual gathering of conservative activists.

U.S. policymakers and industry leaders “need to be honest” about the challenges posed by China and close off points of vulnerability that made it possible for the communist regime to steal American technology, James Carafano said.

Carafano, the think tank’s director of international and foreign policy studies, spoke during a panel discussion at the Conservative Political Action Conference, known as CPAC.

“The crux of the problem is there is a law in China that basically says if you are a Chinese company, then any data you have … we [the Chinese government] have free access to that data,” Carafano said. “If Chinese companies are global, then China has global access to data. … China wants to use data to control the world.”

Carafano described 5G, an abbreviation for fifth generation, as a “transformative technology” that is just the “tip of the spear” of what should most concern U.S. leaders in and outside government who are working to safeguard intellectual property.

Carafano was joined for the discussion by Rep. Cathy McMorris Rodgers, R-Wash., and former acting Attorney General  Matthew Whitaker. Author and columnist Gordon Chang, who has written extensively on the Chinese threat, served as moderator.

Chang asked Carafano to comment on the challenges American companies face in their relationship with China.

“Those companies are going through a very painful learning curve,” Carafano said. “It would be a mistake to just look at Facebook or Apple; we also need to look at smaller companies. China forms joint ventures and they get a seat on the board.”

“We shouldn’t think that if we win 5G, we win,” he added. “It would be like saying after D-Day, ‘We are done.’ We have to win across the board.”

Chang expressed his view that the U.S. and China are in a “tech cold war” and that the “U.S. is behind in critical areas.” He said “a whole society mobilization” is needed across the nation to confront China in the arena of technology.

Chang asked Rodgers to discuss the “dividing line” between the roles of government and the private sector in doing so.

“We now have the left promoting the takeover of the economy with proposals like the Green New Deal,” Rodgers said. “We need the Trump approach that lays out the principles of freedom, individual rights, and liberties because this encourages innovation in the private sector.”

To “win the future,” she said, policymakers should emulate President Ronald Reagan’s approach to the Soviet Union during the Cold War.

“To be a military powerhouse, we also need to be an economic powerhouse,” Rodgers said.

Whitaker also took up Chang’s question about the role of the public and private sectors in responding to China’s global ambitions.

“They use facial recognition software and data analytics against their own people. We use this technology to expand our economy,” Whitaker said. “I’m pessimistic China will play by the rules we use in the free world. China is an authoritarian state. I see the U.S. being a beacon of freedom.”

“The White House is on top of this,” she said.

The Washington Republican also said lawmakers are working on legislation to set privacy standards across the globe. If Republicans take back the House majority, this could be accelerated, she suggested.