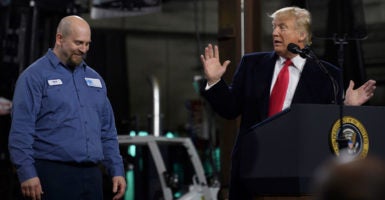 Labor Secretary Eugene Scalia cited Trump’s reference to a “blue collar boom” during his State of the Union address early this month.

Joining Scalia on the CPAC stage was Transportation Secretary Elaine Chao, who while serving as President George W. Bush’s labor secretary tapped Scalia for the position of solicitor.

Scalia, son of the late Supreme Court Justice Antonin Scalia,  pointed to the unemployment rate of 3.6%, a 50-year-low.

He said the unemployment for adult women, at 3.7%, is the lowest in 70 years.

This wasn’t expected, however. The nonpartisan Congressional Budget Office forecast in 2016 that the unemployment rate would be 4.9% by early 2020.

Deregulation has been “absolutely central” to job growth, Scalia said.

“The deregulatory program of this president is the most ambitious, most effective change in regulatory policy since we started doing cost-benefit analysis in the Reagan administration,” Scalia said.

Chao, also the wife of Senate Majority Leader Mitch McConnell, R-Ky., said the challenge for government departments and regulators is to address “emerging new technology with legitimate concerns about safety, security, and privacy without hampering innovation.”

“Innovation is a trademark of who we are as Americans,” Chao said, adding:

We are not top-down. We are not command and control. We believe in the wisdom of the American people. We are going to let them decide what cars they want, what innovation they want, not to throw water on innovation. The whole issue about electric vehicles, we are not going to demand that consumers have to [buy] them.