Out of Africa Not for US 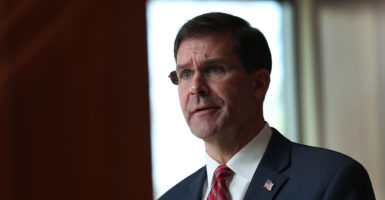 "Defense Secretary Mark Esper drew fire from Congress and elsewhere when it was reported that the Pentagon was downsizing its commitments to Africa," writes James Carafano. Pictured: Esper addresses the media during a press briefing at U.S. Southern Command Jan. 23, 2020, in Doral, Florida. (Photo: Joe Raedle/Getty Images)

Defense Secretary Mark Esper drew fire from Congress and elsewhere when it was reported that the Pentagon was downsizing its commitments to Africa.

It would indeed be wrong-headed for the U.S. to walk away from the continent. But Esper’s actions reflect a sad reality: The U.S. footprint in Africa isn’t right. The problem is, Esper can’t make it right on his own.

The U.S. set up a military command for Africa two decades ago. It was exactly the right move. Before AFRICOM, Africa lurked as America’s post-Cold War strategic blind spot. AFRICOM provides greater situational awareness and a regional partner for security cooperation.

Unfortunately, counterterrorism operations became all-consuming. That’s only gotten worse after crushing the Islamic State’s “caliphate” in Syria and Iraq. That sent the remnants of both ISIS and al-Qaeda scurrying south, looking for new opportunities.

Terrorism, particularly in the Sahel, has exploded in recent years. As many as nine different Islamist terrorist groups now operate in the region, where previously there was only one: AQIM.

Attacks and fatalities are not only increasing, they are spreading. Countries like Burkina Faso, which used to be largely immune, are now under siege.

At any one time, the U.S. normally has between 5,000 and 6,000 military personnel in Africa—many of them engaged in counterterrorism efforts, from training indigenous forces to directing drone strikes.

The Defense Department is rethinking the scope of what the U.S. is doing. Although the Pentagon wants to redirect more effort toward China, that’s hardly a strong rationale for pulling troops out of Africa. They could take every boot in AFRICOM and it wouldn’t be enough to tip over one Pacific island.

On the other hand, these forces play an indispensable role in Africa, especially in the Sahel. The U.S. provides important intelligence, logistics, and air lift capabilities to the overstretched European and local forces that have been battling terror groups.

Still, Esper is right. The American role needs a rethink. The Pentagon on its own is not the answer.

Defense activities are an important part of the fight, but on their own cannot solve terrorism in Africa (or anywhere). Suppressing terrorist groups also requires discrediting the violent Islamist ideology that motivates the terrorists. Only Muslims who interpret their faith in a tolerant way can do that.

And vanquishing terrorism also requires a responsible local government that offers its citizens enough security, justice, and hope for a better future that they are not led to support or acquiesce to terror groups.

The overwhelming challenge for America’s Africa policy is that the continent is burdened with too many incompetent, kleptocratic governments.

China (not to mention Russia) is only making the problem worse. Beijing’s investments fuel corruption more than they bring prosperity. They make bad governments worse.

First, a more coordinated employment of U.S. capabilities that are laser-focused on the challenge. This is not a “whole of government” issue—a bumper-sticker notion that’s the equivalent of a class participation trophy. It’s about getting the right folks together and having them roll up their sleeves and get down to it.

Second, peace and prosperity in Africa is even a bigger deal for Europeans. When things go bad in Africa, it always spills over into Europe. The U.S. and Europe need to partner their efforts—again, with a sharp focus on the problems at hand. This will be a real challenge. Both sides need to get beyond the politics that often drive engagement and move to problem-solving solutions.

Third, U.S. operations have to mitigate the destabilizing influence of China.

What the free world can provide is a partner. Getting that partnership right is more than just pulling troops out of Africa. Esper knows that. What he needs is a team to help get America’s role right.