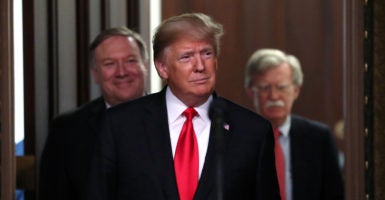 All three of these priorities have been encouraged by conservative foreign policy experts, including those at The Heritage Foundation.

Through its Index of Economic Freedom, The Heritage Foundation has long advocated the economic benefits of free markets for developed and developing countries alike. The Trump administration is correct to recognize that development is far less dependent on foreign assistance than it is on the willingness of African governments to adopt market- and investment-friendly policies.

Along these lines, The Heritage Foundation was an early supporter of the African Growth and Opportunities Act and over a decade ago urged the U.S. to use the act to encourage African nations to embrace regional free trade, greater economic freedom, and the rule of law. The desired goal can and should be to move beyond the current trade preference arrangement toward a true partnership of equals based on free and fair trade.

It was gratifying that the Trump administration similarly wishes to “pursue modern, comprehensive trade agreements on the continent that ensure fair and reciprocal exchange between the United States and the nations of Africa.”

Heritage analysts have also tracked and warned about the growing influence of China in the region and its potential diplomatic, economic, and strategic implications. Bolton is right: “[T]he predatory practices pursued by China and Russia stunt economic growth in Africa; threaten the financial independence of African nations; inhibit opportunities for U.S. investment; interfere with U.S. military operations; and pose a significant threat to U.S. national security interests.”

Heritage analysts have also strongly urged the U.S. to focus on and counter Islamic extremism in Algeria, Kenya, Libya, Nigeria, Somalia, and other countries in the region. The Trump administration is right to focus on this threat in America’s strategy for the region.

Finally, it was good to hear an update on the Trump administration’s new foreign assistance strategy to improve the effectiveness of U.S. foreign aid. Heritage analysts have called for an overhaul of America’s foreign assistance programs that are, in the words of Bolton, “designed to counter the Soviet Union during the Cold War” and “fight terrorism after 9/11” rather than on today’s priorities.

In particular, U.S. foreign assistance will “move recipient states toward self-reliance, and prevent long-term dependency” with less needy recipients graduated from foreign assistance and reductions in aid to countries “making poor policy decisions.” U.S. aid will “target resources toward areas where we have the most impact to ensure efficient use of taxpayer dollars.” Heritage analysts have supported both goals for nearly 30 years.

In line with the strategy’s emphasis on the responsible use of taxpayer money, Bolton criticized the kleptocratic and violent South Sudanese regime that has misused American aid. He expressed skepticism that the same leaders who led that country into war can lead it to peace, in keeping with Heritage analysis.

In addition, Bolton noted, “Countries that repeatedly vote against the United States in international forums, or take action counter to U.S. interests, should not receive generous American foreign aid.” This is in line with statements by President Donald Trump and Ambassador Nikki Haley, and the administration could best pursue that goal by dedicating specific assistance funds to that purpose.

Bolton also underscored the important effort to review all U.N. peacekeeping operations to ensure they are fit for purpose and focused on resolving conflicts.

In the end, it is worth noting that recent administrations have talked a big game about shifting the U.S. and Africa away from a benefactor-supplicant relationship toward a true partnership. This strategy outlines a path to realize that goal.