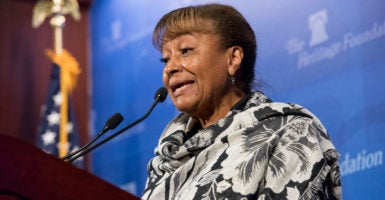 Retired federal judge Janice Rogers Brown warned Tuesday about the perils of the mob that views politics as all important and ignores objective truth.

President Donald Trump has had to contend with a fired-up “resistance” of political opposition that will not recognize his presidency as legitimate, Brown suggested.

“Prior to the 2016 election, America had a cherished tradition of peacefully transferring power. No riots in the streets. No military coups. George Washington himself set the standard,” Brown said. “However, we now know elections have consequences only when the correct candidate is elected.”

Brown, who served on the U.S. Court of Appeals for the District of Columbia from 2005 to 2017, was the honored speaker at The Heritage Foundation’s third annual Jay A. Parker Reception and Lecture.

“Dubbing themselves the resistance, apparently with no sense of irony and perhaps unaware they were doing exactly what the White Citizens’ Council did when the decision in Brown v. Board of Education was announced, the disappointed in 2017 announced that Trump was ‘not their president,’” she said.

I am old enough to remember the black bumper stickers with white lettering that said, ‘Resist,’ the rioters that took to the streets to prevent a tiny black girl from entering the sacrosanct precinct of Little Rock’s white elementary school, and the public officials who blocked the doorways.

The tactics used by the resistance aren’t new, she said.

“Long before the era of civil rights, Abraham Lincoln decried the mobocratic spirit he feared would destroy the republic, that last best hope on earth,” she said.

Brown praised Jay A. Parker, who died in 2015 at 78, as a founding father of the emerging black conservative movement.

Before President George W. Bush appointed Brown to the D.C. Circuit, she was an associate justice on the California Supreme Court from 1996 to 2005, named by Gov. Pete Wilson.

In her speech at Heritage, she pointed to British author and theologian C.S. Lewis’ “The Abolition of Man” as one of her favorite books and quoted from it: “A dogmatic belief in objective reality is necessary to the very idea of a rule which is not tyranny or an obedience which is not slavery.”

Lewis argues in the book that moral subjectivism will destroy society, Brown said.

“In such a world, education and propaganda become one and the same,” she said, quoting Lewis. “So do legitimate rule and tyranny. Duty and goodness cease to exist, and man becomes whatever his appetites and passions make him.”

“‘Abolition’ was written in 1944. It must have seemed wildly exaggerated,” Brown said. “Now, of course, it is merely prophetic. Something has gone terribly wrong.”

The common humanity identity of the civil rights era has been superseded by the virulent, common-enemy, identity politics of today’s progressives.

Political correctness encouraged by good manners has become inciting orthodoxy. Speech codes have morphed into full-scale riots where students at elite schools can threaten and badger administrators and faculty, while claiming physical assaults on unpopular speakers are justifiable self-defense.

“Few people think that our country cannot be improved on. But to present it as riddled with bigotry, hatred, and oppression is at best a partial and at worst a nakedly hostile prism [through] which to view society,” Brown said. “It is an analysis expressed not in a manner of a critic hoping to improve, but as an enemy eager to destroy. There are signs of this everywhere we look.”

Brown noted that leftist indoctrination of youth begins as early as preschool, and she prompted applause when she said the solution could be “Take your children out of government schools.”

“We have lost several generations. We have to do what we can. They are doing what they can,” Brown said, referring to the left. “They essentially run reeducation camps as part of freshman orientation. So, we have to do likewise and try to find more opportunities where young people can at least be exposed to what conservative ideas really are about.”