The Conservative Legacy of Jay A. Parker 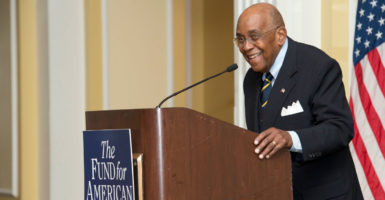 If you haven’t heard the name Jay A. Parker, you don’t know about someone who was a giant of the modern conservative movement and counted Supreme Court Justice Clarence Thomas as one of his most faithful readers.

“His signal contribution to the conservative movement was the founding of the Lincoln Institute and its journal, The Lincoln Review, filled with articles about the first principles of our republic and how to apply them to the problems of today,” Lee Edwards, a historian and former communications consultant, told The Daily Signal.

Parker founded the Lincoln Institute for Research and Education in Great Falls, Virginia, based on the belief that America’s economic system, free enterprise, and capitalism would do the most good in moving toward racial equality.

Edwards, the distinguished fellow in conservative thought at The Heritage Foundation, said that long before he became a Supreme Court justice, Thomas told Parker, “I thought I was the only one out there.”

“From the beginning, there was a close friendship between the young black lawyer who became an associate justice of the Supreme Court and the founding father of the modern black conservative movement in America,” Edwards said.

After meeting through Young Americans for Freedom in the early 1960s, Edwards and Parker went on to form the first integrated public affairs firm in Washington, D.C.

Before moving to Washington, Parker was co-host of the Philadelphia radio show “Left, Right and Center” as well as working for Young Americans for Freedom.

Ginni Thomas, wife of Clarence Thomas, spoke with The Daily Signal about the couple’s relationship with Parker.

The Thomases recently had a conversation in which Clarence Thomas remembered meeting Parker for the first time in 1979, Ginni Thomas said.

The future Supreme Court justice was on the staff of Sen. John Danforth, R-Mo., when Parker sent around the first edition of Lincoln Review to Senate offices.

It caught the eye of another staffer who brought Parker’s work to his attention. The colleague told the future Supreme Court justice: “There’s somebody that you should know who thinks like you do.”

“It started the beginning of a lifetime friendship between Jay and Clarence,” Thomas said. “Jay was a lifelong friend, and mentor, and encourager, and father figure, really, for my husband.”

She described Parker as “an encourager” and “a principled defender of free markets and individual liberties.”

Last week, The Heritage Foundation held its second annual Jay A. Parker Lecture and Reception in his honor, focused on the theme of civility.

Heritage’s veteran health care expert, Robert Moffit, first met Parker in 1963 in Philadelphia at a meeting of Young Americans for Freedom. Parker became a mentor to the teenage Moffit for years to come.

“Jay greeted me warmly, engaged in conversation, and was delighted to learn that I attended Roman Catholic High School in Center City Philadelphia,” Moffit recalled at a memorial service for Parker in 2015.

“He took an intense interest in me, even though I was just a high school kid,” Moffit said.

“His greatest gift was encouragement,” Moffit said. “He encouraged me to become involved in politics and public policy. I eventually ended up in the Reagan administration, joining a great team and then enrolling in one of the greatest alumni associations in the world.”

Though he held other posts in the Reagan administration, Parker’s work did not stop with government service.

Don Devine, who headed the Office of Personnel Management during Reagan’s first term, told The Daily Signal that he was impressed by Parker’s passion for volunteering and serving different communities.

“He … influenced us all, especially with his love of the voluntary sector in solving social problems, rather than government bureaucracy. And not just in theory, but was a leader in many local ones himself,” Devine, now the Grewcock senior scholar for The Fund for American Studies, said.

For those who knew him, the mark left is of a man knowing how to live, how to put a balance to his politics and his charity and his family. Because he believed in the Salvation Army and Kiwanis and the Lighthouse for the Blind. And he took time to mentor people that needed help. So he’d have breakfast with people at the University Club [of Washington]. …

His legacy is one that shows us how to live a life of principle and virtue and civility. And yet care about others in a Christian way.

He lived his life as an example of how to live a principled and colorblind life. Because … he watched for people of character and integrity and promise, and he mentored those people whether they were white or black, or whatever gender they were.

Roger Ream, president of The Fund for American Studies, said he met Parker in 1975 and considered him a dear friend and adviser.

“He was a role model and adviser to young and old alike. He had a steadfast belief in limited government, but understood that a free society required a strong civil society and personal responsibility,” Ream told The Daily Signal, adding:

He treated people as children of God who deserved respect. Jay’s friendships included men and women of every background and political view. He advised people who rose to the heights of power and influence, but also found time as well for those who were just getting started on a career path. He always wore a radiant smile and had an encouraging word to offer. He lived life to the fullest and left a legacy through the many young people he inspired to make freedom and service the bookends of a life well lived.

In an appreciation of Parker published by The Washington Times, Ream wrote that during the 1970s Parker became active in the American African Affairs Association, seeking to “spread freedom and democracy in the newly independent nations of Africa.”

He also noted that Parker brought together thinkers in the “emerging black conservative movement” such as Clarence Thomas, Walter Williams, and Thomas Sowell.

Edwards, like others, noted that Parker cut a fine figure and had a ready smile.

“A day without Jay was like a day without sunshine,” Edwards said. “He was always smiling, always impeccably dressed in a Brooks Brothers suit and vest. He was the master of PMA—a positive mental attitude. Nothing seemed to faze him.”