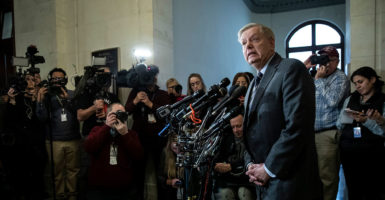 Sen. Lindsey Graham, R-S.C., speaks to reporters outside of his office at the U.S. Capitol as debate on the articles of impeachment against President Donald Trump continues Dec. 18, 2019, in Washington, D.C. (Photo: Drew Angerer/Getty Images)

A Senate investigation of the FBI’s abuse of the Foreign Intelligence Surveillance Act will start off with a focus on a mysterious source for Christopher Steele who disputed much of the former British spy’s infamous dossier, Sen. Lindsey Graham said Sunday.

Graham said his first order of business during the probe will be to interview four FBI and Justice Department officials who interviewed the primary source for Steele’s dossier in January 2017, he said in an interview on “Sunday Futures with Maria Bartiromo.”

“The first thing I want to do is call the people who heard from Russian sub-source that this dossier is a bunch of bar talk and hearsay,” Graham said.

He is referring to an individual identified in the Justice Department inspector general’s report only as “Primary Sub-Source.”

The inspector general’s report said the person was Steele’s only direct source for information that ended up in the dossier, which the FBI cited extensively in its four applications for FISA orders on Carter Page.

The source’s statements to the FBI and DOJ officials were explosive, according to the inspector general’s report. It said Steele’s source disputed much of what was attributed to him in the dossier, which was funded by the Democratic National Committee and Clinton campaign.

“The Primary Sub-source made statements during his/her January 2017 FBI interview that were inconsistent with multiple sections of the Steele reports, including some that were relied upon in the FISA applications,” the report stated.

The source said Steele misrepresented or embellished information regarding Page’s involvement in what the dossier said was a “well-developed conspiracy of cooperation” between the Trump campaign and Russian government.

Graham said he also wants to know whether former FBI Director James Comey and former FBI Deputy Director Andrew McCabe were ever told about the Steele source’s contradictory statements about the dossier.

“I want to find out when did Comey and McCabe understand it was not reliable and start from there,” Graham said.

The report stated that David Laufman, who served until 2018 as chief of the Justice Department’s counterintelligence and export control section, arranged and took part in the interview with the dossier source in January 2017. His deputy also participated. An FBI counterintelligence investigator identified as “Case Agent 1” and a “Supervisory Intel Agent” also took part in the interview.

The report is particularly harsh toward Case Agent 1, who was involved in drafting the Page FISA applications.

“Case Agent 1 was primarily responsible for some of the most significant errors and omissions in the FISA applications,” the report stated.

The Justice Department deemed the last two FISA orders granted against Page to be invalid, based largely on the FBI’s omissions of what Steele’s source said about the dossier.

Graham sent a letter to Attorney General William Barr on Feb. 14 asking that he make 17 current Justice Department and FBI employees identified in the inspector general’s report available for closed-door depositions. Case Agent 1 is included on the list. Graham has also said that he wants to have open hearings with Comey and McCabe.