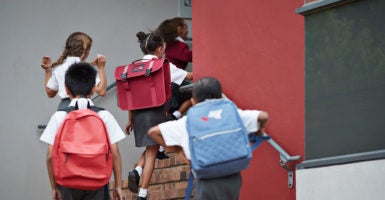 After getting an earful from the local community, Fifth Third Bank decided its $5.4 million investment in school choice for Florida would go on. (Photo: Klaus Vedfelt/Getty Images)

Seven hundred kids. That’s how many students would have lost their scholarships—and a chance at a better life—if Fifth Third Bank hadn’t come to its senses.

Instead, after a week of uncertainty, the company sat down with Florida parents and pastors and decided not to listen to Florida’s cultural bullies. It’s one thing for a company to support LGBT extremism. It’s quite another, the bank agreed, to hurt needy children in the process.

Most kids had already left school for the weekend when they got the good news: One of the biggest contributors to the Florida voucher program wasn’t dropping out after all.

Fifth Third Bank—who’d joined Wells Fargo in abandoning the scholarships—had gotten an earful from the local community. And, after a few days of protests, rallies, and nonstop phone calls, the business finally relented: Its $5.4 million investment in school choice for the state would go on—regardless of what the Orlando Sentinel and a handful of liberal lawmakers think.

It was a major reversal for the bank, who threw the program into complete chaos earlier in the month—all because parents had the option of using those scholarships for religious schools, who (not surprisingly) have religious beliefs.

Democratic state Reps. Anna Eskamani and Carlos Guillermo Smith apparently object to that and have been harassing corporate donors to drop their contributions over those schools’ biblical views on marriage and sexuality.

Local parents, pastors, and politicians were furious—including a good number of their Democratic colleagues. Members like state Reps. James Bush III and Al Jacquet couldn’t believe their party would actually use children as pawns to appease the LGBT Left.

“We have children that need these opportunities,” Bush said. When there’s a chance for parents to have a choice that will help their kids, “we should afford them that opportunity.”

So when Fifth Third’s leaders finally listened to reason and reinstated their donations, Sen. Marco Rubio, R-Fla., who’s been an outspoken champion of the program, was thrilled.

“I am glad to see Fifth Third Bank putting students and their families above destructive identity politics,” he said. “It shows people can raise their voice and overcome the insane ‘woke’ agenda that drives our politics and culture. School vouchers provide opportunities for low income and special needs students, and I am proud of all the Floridians that stood up for these children.”

Other leaders from both parties, including Gov. Ron DeSantis, also praised the company for seeing the bigger picture.

As principals like Lakisha Robinson know better than anyone, this option is sometimes the only option for parents. Her Victory Christian Academy is right smack-dab in the inner-city of Orlando, an “oasis in the desert,” as she calls it.

“We’re almost all minori[ties],” Lakisha explains. “We have mostly African Americans … in an area that’s mostly impoverished.” When parents have the choice between a failing school or a private one, “it’s a whole other ballgame.”

But Victory, like other schools in the program, is “unapologetically Christian,” so having bullies at the door is nothing new.

“We catch a lot of different heat in this area,” Lakisha explained on “Washington Watch.” But the reality is, Lakisha explains, no child is forced to go to their school—parents choose it. And they do so, she points out, even when they aren’t Christians themselves because “they love the positive environment of the academy” and its proven success.

Sure, she agrees, they could get more money being a charter school (which is what a lot of liberals have tried to push Victory toward), but that would mean surrendering their values.

They [wouldn’t] allow us to use our Christian curriculum or … allow us to keep ‘Christian’ in our name. And we want it to be Victory Christian Academy, not Victory Academy.

The state’s voucher program is one thing that helped her school keep its identity and offer a high-class education. “It means more to us to stand firm on God’s principles.” These needy neighborhoods, she insists “need the Word of God more than anything.”

And the results speak for themselves. In these past 18 years, students are graduating and getting into good universities.

“These are first-generation college students,” she says. Their lives—and the lives of their families—will be forever impacted because of this program. If Fifth Third Bank can see that, surely Wells Fargo can too.