His Foes ‘Vicious’ and ‘Genius’ in Impeachment, Trump Tells Supporters 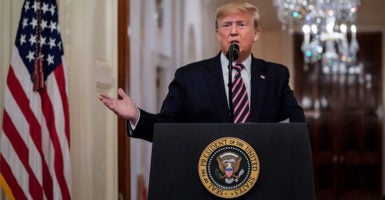 “Think what we could have done if the same energy was put into infrastructure, prescription drug prices," President Donald Trump says Thursday in the East Room of the White House, one day after his "total acquittal" in a Senate impeachment trial. (Photo: Drew Angerer/Getty Images)

President Donald Trump, throwing what he called a “celebration” Thursday at the White House, said the nation could have accomplished more by now if not for the time put  into his impeachment and legal defense.

The president spent much of the occasion, which went more than an hour, thanking individual Senate and House Republicans who helped to defend him.

Lawmakers, Cabinet members, staffers, and other supporters joined the president one day after the Senate voted to acquit him on charges of abuse of power and obstruction of Congress that grew out of his July 25 phone conversation with Ukraine’s president.

After the partisan ordeal, Trump did have one nice thing to say about Democrats:

I will say it’s genius on the other side and even more so, because they took nothing and brought me to a final vote on impeachment. That’s an ugly word for me, that’s a very dark word. … But now we have that gorgeous word. I never thought a word would sound so good. It’s called total acquittal.

Trump did not use the event to address the nation, as many had expected, but instead expressed gratitude directly to his White House audience.

And the president contested some who objected to his raising apparent issue of conflicts of interest in Ukraine for former Vice President Joe Biden and son Hunter Biden in his call to Ukrainian President Volodymyr Zelenskyy.

“You know, I had some that said, ‘Oh, I wish he didn’t make the call.’ That’s OK if they need that. It’s incorrect. It’s totally incorrect,” Trump said.

For the second time Thursday, the president referred to the lone Senate Republican vote against him cast by Sen. Mitt Romney of Utah, who was the party’s presidential nominee in 2012. This time, he eventually identified Romney by name.

“Then you have some that used religion as a crutch. They never used it before,” Trump said. “But it’s a failed presidential candidate, so things can happen when you fail so badly running for president.”

Romney, a Mormon, invoked God and his faith on the Senate floor Wednesday in explaining why he would vote to remove Trump from office for abuse of power.

The president said he doesn’t believe Pelosi’s repeated claims that she prays for him.

“She doesn’t pray for the president. She may pray, but she prays for the opposite. But I doubt she prays at all,” Trump said, adding:

These are vicious people. But they do two things. They stick together—historically—like glue. That’s how they were able to impeach. …

Trump also had referred to Romney and Pelosi that morning at the National Prayer Breakfast, although not by name.

At the White House, Trump said Democrats’ impeachment effort began with “tremendous corruption,” an opposition-research dossier on him, and FBI officials such as former Director James Comey whom he referred to as “dirty cops.”

As he had at the prayer breakfast, Trump also held up a copy of The Washington Post with its big headline saying “Trump acquitted.”