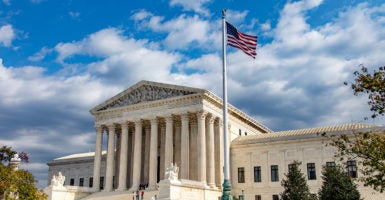 The Supreme Court Monday allowed the Trump administration to enforce a new rule that will deny green cards to foreign nationals who use taxpayer-funded social services, lifting lower court injunctions that blocked the change.

The Immigration and Nationality Act (INA) dictates that foreign nationals should not receive green cards if they are “likely at any time to become a public charge.” At issue in Monday’s case is the definition of “public charge.” In recent years, the term was defined as a person primarily dependent on a cash assistance program.

The Trump administration promulgated a new rule in August 2019 that expands the definition to include those likely to use non-cash benefit programs like Medicaid, food stamps, or housing benefits for a period of months. The rule does not apply to humanitarian migrants like refugees or asylum-seekers.

“Throughout our history, self-reliance has been a core principle in America,” then-acting Director of U.S. Citizenship and Immigration Services Ken Cuccinelli said of the new policy during a 2019 White House press conference. “The virtues of perseverance, hard work, and self-sufficiency laid the foundation of our nation and have defined generations of immigrants seeking opportunity in the United States.”

Immigrant rights groups say the rule will have a discriminatory effect, and warn that it deters migrants lawfully in the United States from applying for needed social services.

“Our members have stopped accepting or refused to apply for public benefits for themselves and their family members, including their children, because of fear that receiving any benefits will harm their ability to stay in the United States,” said George Escobar of CASA, a D.C.-area immigration nonprofit that is challenging the rule in court. “This harms not just these families, who use these benefits to supplement their incomes and support their health, well-being, and stability, but also the broader community.”

U.S. District Judge George Daniels issued a pair of injunctions against the rule after two separate plaintiffs—the city of New York and a coalition of three states—brought lawsuits challenging the change. Daniels found that the administration did not give a reasonable explanation for its new definition, which is itself an unreasonable interpretation of the INA.

The 2nd U.S. Circuit Court of Appeals affirmed that decision, prompting the government’s emergency application to the Supreme Court.

In legal filings at the Supreme Court, the plaintiffs warned that lifting the injunctions would abruptly upend settled immigration policy going back decades. They also predicted that confusion would follow such a change because the government has not provided sufficient guidance for administering the new policy.

For example, the rule requires immigration officers to negatively weigh an alien’s low English proficiency, but the plaintiffs say there are no guidelines for how language skills should be assessed.

The administration countered that the injunctions force them to issue green cards to applicants who are not eligible for permanent legal status under the new rule. If the government ultimately prevails in court and gets to enforce the rule, they won’t be able to rescind green cards issued during litigation.

“Respondents do not dispute that because of the nationwide preliminary injunctions, the government is presently awarding—on an effectively irrevocable basis—grants of lawful permanent resident status to aliens who, under the Rule, should instead be declared inadmissible,” the Justice Department said in a court document.

The case is No. 19A785 Department of Homeland Security v. New York.