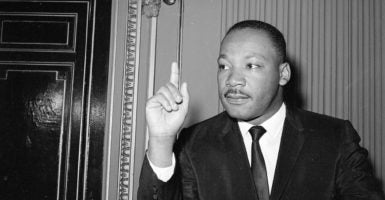 Martin Luther King Jr. believed that overcoming America’s race problem required a change of heart that would inspire men to realize the promise of the American founding. (Photo: Bettmann/Getty Images) 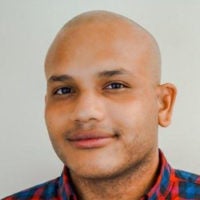 “These are the hard, brutal facts of the case,” wrote Martin Luther King Jr. from a Jefferson County jail cell in Birmingham, Alabama, on April 16, 1963.

Birmingham, Alabama, had a race problem.

The United States at large had a race problem that traced back to when the first African slaves were first imported to Virginia in 1619. It was not ameliorated when Abraham Lincoln’s Union Army dispossessed the Southern aristocracy of its slaves, and remained acute in places like Birmingham, where King first established himself as the man that would lead the United States into the multiracial era.

We Are American Citizens

King’s efforts to improve conditions for blacks in the American South first attracted national attention in December 1955 when King’s Montgomery Improvement Association organized a boycott of Montgomery, Alabama’s segregated busing system to protest the arrest of Rosa Parks. She had refused to join three other blacks in giving up her seat for one white man.

This carefully planned episode, which forced several passengers to leave Parks’ bus while its operator, J. F. Blake, called the police, made King the face of the civil rights movement at 26 years old.

Speaking to the first mass meeting of the Montgomery Improvement Association, comprised of blacks interested in boycotting the buses, King told his followers: “First and foremost we are American citizens.”

He had not gathered the people to advocate violence but to wield “the weapon of protest” to show that the “great glory of American democracy is the right to protest for right.”

Hating and resenting one’s enemies was unbecoming of the organization’s members, who were activists “guided by Christian love” in their efforts to attain justice from a system of color-conscious laws.

According to historian David J. Garrow, less than an hour before the meeting, King “became possessed by fear” and the feeling that he was ill-prepared to “combine two apparent irreconcilables, militancy and moderation.”

King reconciled militancy and moderation by 1963 in his “Letter From a Jail in Birmingham.” Approaching civil rights militantly required black and white protesters to disobey unjust laws and stoke racial tension to highlight the hypocrisy of Southern Dixiecrats. A moderates’ approach to civil rights kept in mind that disobeying unjust laws wasn’t a license to anarchy.

As King’s career progressed, it became harder to counterbalance militancy and moderation to appease black audiences in urban centers, where blacks saw different shades of discrimination and economic hardship than Southern blacks.

As the 1950s came to an end, New York Times correspondent Michael Clark was covering raucous gatherings of black nationalists in Harlem, New York. He reported one encounter at an event organized in November 1959 by James Lawson, president of the black nationalist organization called the United African Nationalist.

When the president of New York’s NAACP chapter, L. Joseph Overton, took to the microphone, he was resoundingly booed. One witness noted that inviting the NAACP to speak at the meeting was “tantamount to waving a red flag in front of a bull.”

“I dare say there is no group with higher moral standards,” Overton said.

The Nation of Islam and other black separatists were stepping up to speak “angry words” to blacks, some of whom had become, according to New York Times correspondent Hodding Carter in May 1960,  a “New Negro.” Carter borrowed the phrase from the Harlem Renaissance.

Malcolm X was the “New Negro,” bar none. In October 1962, he traveled from Harlem to Oakland, California, to condemn Freedom Rides, which were organized by King and the Congress for Racial Equality to transport buses of black and white activists through the segregated South.

Malcolm X wanted a race war for which blacks must be “ready to die.” Freedom Riders, said Malcolm, only made “white lawyers rich.”

Less than three years later, Malcolm X was murdered in front of his family in February 1965 after publicly feuding with the Nation of Islam over its race hatred.

King understood the temptation to fight identity politics with identity politics, but refused. He preached that any form of race nationalism defied the “edicts of the Almighty God himself.”

Speaking at DePauw University in September 1960, King urged black Americans to never “become bitter in the struggle” and to guard themselves against being pulled “so low as to make you hate [whites].”

Fomenting hate in one’s heart would distort the civil rights struggle into an attempt to “defeat or humiliate the white man” rather than making it about forging friendships with whites that bound all together in a society, where men could live as brothers. Rioting, clamoring for violence, and drinking the poison of race nationalism would perpetuate racist thinking that created America’s race problem in the first place.

Ultimately, King believed that overcoming America’s race problem required a change of heart that would inspire men to realize the promise of the American founding.

Thomas Jefferson, one of the most brilliant Founding Fathers, wrote that all men are created equal, even as black slaves maintained the grounds of his home at Monticello. Years after Jefferson penned the Declaration of Independence, some of his slaves were rumored to strongly resemble his countenance.

Jefferson was skeptical about the future of race relations. He believed that if slavery were abolished, racial prejudice might still be too great to surmount.

King’s “I Have A Dream” speech, delivered at the March on Washington in August 1963, aimed higher than Jefferson was willing to climb and cemented his status as the last Founding Father.

His message was simple. When it came to judging one’s fellow citizens, character, not skin color, counted most. America would become a truly great nation on the day when the descendants of slaves and slave owners could sing sincerely, “My country, ’tis of thee, sweet land of liberty, of thee I sing.”