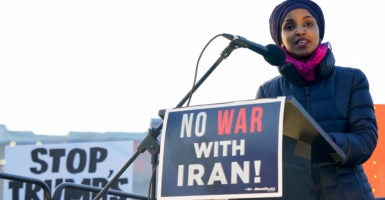 Rep. Ilhan Omar, D-Minn., speaks Thursday during a "No War With Iran" rally organized by Moveon.org outside the U.S. Capitol. (Photo: Leigh Vogel/Getty Images for MoveOn.org)

“This administration says starving the Iranian economy is in defense of human rights, when it is an abuse of them,” Omar said. “That withdrawal from the [Iran] nuclear deal was a demonstration of American leadership when it is an abandonment of it.”

“Escalation is deescalation. War is peace,” she added, referring to the administration’s message. “In fact, they’re asking us to deny reality.”

Omar said the families of American soldiers and diplomats “are being kept awake at night worrying.”

She also emphasized that the Iranian and Iraqi people are suffering unjustly.

“The Iraqi people, who have suffered decades of unjust war, are now unjustly suffering as their country becomes a battleground in a proxy war,” the Minnesota Democrat said. “The Iranian people have suffered because of maximum pressure and will suffer because of this escalation.”

“This administration has gone abroad in search of monsters to destroy,” she said. “May God show us the way to freedom, independence and peace.”