Recalling the Battle of the Bulge 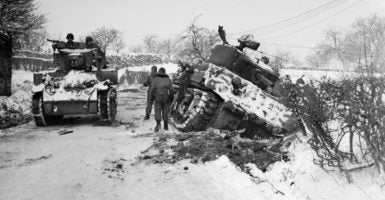 January 1945: Hard going for U.S. tanks at Amonines, Belgium, on the northern flank of the "Battle of the Bulge." A tank on the road passes another being dug out of the snow. (Photo: Fred Ramage/Keystone/Getty Images)

The American and British armies were completely surprised by a last-gasp German offensive, given that Allied forces were near the Rhine River and ready to cross into Germany to finish off a crippled Third Reich.

The Americans had been exhausted by a rapid 300-mile summer advance to free much of France and Belgium. In their complacence, they oddly did not worry much about their thinning lines, often green replacement troops or the still-formidable Germany army. After all, Nazi Germany was being battered on all sides by Americans, British, Canadians, and Russians. Its cities were in ruins from heavy bombers.

Yet the losing side is often the most dangerous just before its collapse.

In retreat, the Germans were shortening their interior lines. They had the element of surprise, given confident allies who assumed the war would soon be over.

The cold December weather would ground the overwhelming number of Allied fighters and bombers. The Germans aimed their assault through the snowy roads of the Ardennes Mountains to bowl over inexperienced or exhausted U.S. divisions.

The result was that Hitler’s last gamble in the West was as tactically brilliant as it was strategically imbecilic. If Hitler’s offensive failed, it would drain the last formidable reserves from the German homeland and leave it a hollow shell. After all, Germany had neither the manpower nor the supplies to reach the English Channel and cut off the British from the Americans, much less stop either the Russian offensives in the East or around-the-clock Allied bombing.

Yet, during the last two weeks of December, crack German veterans tore huge holes in the Allied lines and pushed them back almost 50 miles in some spots. On such a narrow front, German forces outnumbered the Americans, and their tanks and artillery were superior.

Yet by the second week in January, the monthlong offensive had largely failed. The Germans were in retreat. They had lost almost as many men and machines as the Americans but lacked a commensurate ability to replace them.

What can we learn from our bloodiest battle on the 75th anniversary of it?

The deadliest periods of a war are often near its end. The losing side puts up a desperate resistance that is often unexpected by the overconfident, winning opponents. One of the most lethal American battles in the Pacific Theater was fought at Okinawa, costing 50,000 casualties and ending just weeks before Japan surrendered.

American strategists failed to grasp that even though Germany was likely to lose the war sometime in 1945, it could still kill thousands of Americans before it surrendered.

Before the Battle of the Bulge, Eisenhower, Omar Bradley, Bernard Montgomery, and Courtney Hodges thought fellow general George S. Patton was a talented, eccentric, flamboyant, and sometimes buffoonish throwback to 19th-century glory hounds. Yet it was Patton alone who in America’s darkest hour of 1944 most clearly grasped both the dangers of, and the solutions to, the disaster.

To no avail, Patton had warned his superiors that a gambler like Hitler would likely try something desperate in December. Even before the generals met, Patton had preplanned a risky rescue operation. In a blizzard, he turned a large part of his army 90 degrees on a 100-mile trek to save the collapsing American lines to the north at Bastogne, Belgium.

Had the American command followed the rambunctious Patton’s recommendation to cut off the overexposed German bulge at its base, rather than conservatively try to push it back at the nose, the campaign would have ended even sooner, with far fewer lost American lives.

The face of war changes with new technology. But its essence remains the same, because human nature stays constant. A long-ago American victory can remind us that when such calamities strike, the status quo is not always equipped to rise to the challenge.

Instead, our future saviors are often right in our midst, characteristically loud and underappreciated, but savvy and vital to our survival.

The Battle of the Bulge reminds us that when deadly enemies prove unpredictable, it is sometimes wise to have an even more unpredictable leader on our side.