The Left Is Itching to Repeal Your Tax Cuts. Here’s What That Would Mean. 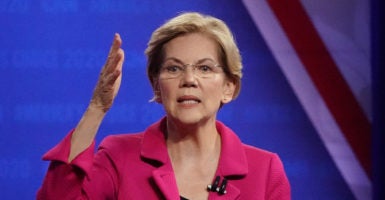 Sen. Elizabeth Warren, D-Mass., and other leading voices on the left have proposed rolling back the 2017 tax cuts, and more. (Photo: Mario Tama/Getty Images)

Abraham Farooqui is a member of the Young Leaders Program at The Heritage Foundation.

It’s no secret that Democrats want to raise taxes on the rich. They are less willing to admit that their plan would actually raise taxes and shrink economic opportunity for the middle class.

Since the 2017 tax cuts are now two years old, it’s worth revisiting the most universally agreed upon Democratic proposal to raise your taxes: the Repeal the 2017 Tax Cuts and Jobs Act.

Leading Democrats like Sens. Elizabeth Warren, D-Mass., and Bernie Sanders, I-Vt., have said they want to roll back the 2017 tax cuts.

Taking them at their word, what would a repeal of the tax cuts look like for the average American taxpayer?

Most Americans Worse Off

If the tax cuts were repealed in 2020, the average American would be $26,906 poorer over the next decade. Taxes would go up and incomes would go down in every state, every congressional district, and at every income level. The pain would be felt all across the country.

These numbers represent both direct tax increases and slower wage growth from what could easily become a flat-line economy under higher taxes. If you like your higher paycheck, you may not get to keep it.

>>> How 2 Years of Tax Cuts Have Supported Our Strong Economy

As Christmas approaches, it’s easy to imagine the lost charity and gifts that would be stolen by a dramatic tax increase. Income that could have gone to a local church, spent on daycare expenses, or the down payment on a home would instead go to government.

American taxpayers know how to spend their money better than lawmakers in D.C. Washington should let them keep it.

Opponents of the tax cuts have claimed that Americans actually didn’t benefit or that most people’s taxes went up. But the numbers don’t lie. Even The New York Times admits that you (probably) got a tax cut.

Repealing the 2017 tax cuts is not just about taxing American employers at highest-in-the-world rates again. It’s also about raising individual income taxes, cutting the child tax credit in half, shrinking the standard deduction, and curbing new investment for U.S. workers.

And repealing the tax cuts is only part of the left’s tax hike agenda. These figures don’t include the additional losses taxpayers will experience from new and even higher taxes. The left wants to make you pay for misguided and bloated entitlement programs, both old and new.

A favorite punching bag of the left is big business. But let’s consider what these businesses do when they can keep a bit more of their profits: They often reinvest it into new equipment, expand factories, and improve technology.

These are the things that lead to higher wages and more job openings for American workers.

In our current economy, we have more job openings than people looking for work and the highest monthly job openings since December 2000. And a lot of these open positions are blue-collared jobs.

Unemployment has been hovering around 3.5%, which is a 50-year low, and wages are rising faster than we’ve seen in quite some time, especially for lower-income workers.

This economy is a boon to lower-earning and middle-class families, enabling more Americans to experience the meaning and dignity that comes from being able to support oneself and one’s community through work.

If the tax cuts are repealed, many of these benefits will disappear. Under the pre-tax reform corporate rate, businesses were moving jobs and capital offshore because domestic taxes were uncompetitive, putting American workers at a disadvantage.

We’re On the Right Path

American workers are doing well under the tax cuts. But consumers are also doing well. Consumer confidence remains high, retirement accounts continue to grow with the stock market, and inflation remains low—all despite the trade war and runaway federal spending.

Repealing the 2017 tax cuts would mean higher taxes on all Americans, and higher taxes wouldn’t just mean Americans sending more of their paycheck to Washington. It would mean lower wages and more limited job opportunities.

Instead, lawmakers should focus on making critical provisions of the 2017 tax bill permanent to keep taxes low and solidify future economic opportunities.