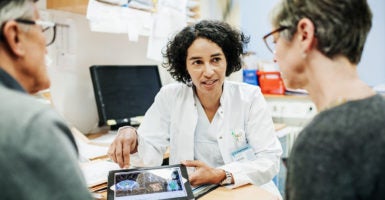 When it comes to the big-ticket items—combating cancer, heart disease, and stroke—we're getting superior results. (Photo: Tom Werner/Getty Images)

“The U.S. spends more than other countries on health care and gets worse results.” You hear that argument a lot—especially from those pushing for “Medicare for All” or some other government-run health system.

But is it true?

Certainly Americans spend more on health than other nations. But the latest report on health care from the Organization for Economic Cooperation and Development shows that, in many ways, we’re getting a pretty good return on that investment.

In evaluating health systems, what matters most are the medical results they deliver. And the OECD report shows that, when it comes to the big-ticket items—combatting cancer, heart disease, and stroke—America is getting superior results.

For example, 90% of American breast cancer patients lived at least five years after treatment, compared to a survival rate of only 85% in the rest of the OECD countries. Indeed, the report confirmed a “clear positive association” between per capita health spending and breast cancer survival—suggesting that spending more on health is not necessarily a bad thing.

Part of that is due to early detection. For example, the researchers found that 80% of American women received “timely” cervical cancer screening, compared to only 73% of women in the organization’s other countries.

America’s superior performance on cancer care has been documented before. A 2017 study in Epidemiology and Health found that, compared to Britain, Canada, and France, the U.S. delivered better survival rates for prostate and stomach cancer, as well as breast cancer.

In 2015, the Centers for Disease Control and Prevention reported that, among seven leading countries, the U.S. had the highest five-year survival rates for breast, colon, lung, and prostate cancer.

This year’s report also found that the American mortality rates 30 days following a heart attack or stroke were significantly lower than those of most other OECD states. Again, the stroke findings echo those of an international study reported last year in the Journal of the American Medical Association.

This is not to say that the report contained no surprises.

Although it’s common knowledge that the United States spends more on health, in the aggregate and per capita, than any other OECD country, the new report showed that seven advanced countries actually pay more for the same medical goods and services. For example, prices are 10% higher in Sweden, 20% higher in Norway, and a stunning 39% higher in Switzerland.

There are, however, tremendous pressures on American health care financing and delivery. For instance, it costs more to deliver timely cancer screenings than to put people on screening waitlists. Then, again, timely screenings save lives.

And there are limitations inherent in any country-to-country comparisons.  For example, our population at large is notoriously overweight. The U.S. obesity rate is third-highest among the 36 member OECD nations.

Obesity poses a high risk for chronic illnesses, particularly diabetes. More than 1 in 10 Americans now suffer from diabetes—a situation that, by itself, puts great stress on the health care system. Yet the prevalence of obesity and diabetes in no way impeaches our system—unless your “solution” is to stop treating so many diabetics.

Does our health care system work well across the board? Of course not. The new report shows that all 36 countries, including the United States, have mixed results on a wide variety of health care metrics. That’s because there are wide differences among countries in lifestyles, genetics, and environmental factors aa well as the systems—many of them highly complex—through which treatments are offered and funded.

In short, the OECD report cannot and does not “make the case” for any one type of health system over another. Both left and right can cherry-pick from among its numerous findings to coat their silly slogans and bumper-sticker health policy recommendations with the patina of research. But that’s taking the study way too far.

As the researchers note, their far-ranging statistical review should be used as the “groundwork for deeper policy analysis.”