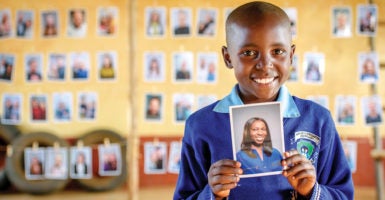 Eight-year-old Mary from Mwala, Kenya, chose a woman from Chicago as her sponsor. (Photo: World Vision)

“Chosen” is the name of World Vision’s new child-sponsorship initiative—an effort poised to revolutionize the way the Western world thinks about sponsorship programs.

Sponsorship of children abroad in poverty is not a new concept. TV infomercials filled with images of needy children in far-flung impoverished nations and photos on bulletin boards in church lobbies or on nonprofits’ websites have been the norm for decades. Sponsors have sorted through the images to select a child to sponsor—until now.

“It was just this simple, but radical, idea of saying, ‘What if, from the very beginning of a child-sponsor relationship, we could think of something that would reflect the inherent God-given dignity that that child has?’” Michael Chitwood, World Vision’s executive director of church partnerships, told The Daily Signal in a phone interview this week.

The original sponsorship model won’t disappear because, Chitwood explained, “there are a lot of different contexts where our traditional invitation for sponsorship can still be very powerful and will be, but this is a new option, and I think it is to be determined just how integrated it will become into all that we do.”

“We’re seeing that at least 60% to 70% of ‘Chosen’ sponsors are new to World Vision,” Lauren Fisher, senior public relations manager for World Vision, said in an email.

Today, World Vision is active in about 100 countries worldwide, providing practical resources and tools to lift children and families out of poverty.

The decision to change the sponsorship invitation came out of a small task force, dubbed “the Big Idea Team,” that was established under World Vision CEO Edgar Sandoval. Sandoval became chief executive in October 2018 after serving as the organization’s chief operating officer for three years.

Chitwood recounted that when Sandoval became CEO, he said, “We are going to come up with a big idea. And everyone asked, ‘What is it?’ and he said, ‘I don’t know, but we are going to ask God for it. We are going to just step into it and try to innovate and think.’”

The “Chosen” campaign was initially just “one page of a halfway-fleshed-out idea,” Chitwood said.

“And so that is where the question began of saying, ‘What if we just flipped the script?’” Chitwood said. “What if, for the first time in history, instead of people walking out of a church service and choosing a child to sponsor, what if we just flipped the script and took pictures of people and sent them to the community and let the kids choose?”

“What we saw and experienced blew us away,” Chitwood said as he recounted the pilot Sunday of the “Chosen” campaign at Soul City Church. “It just tapped into what we already believe about child sponsorship, which is that it is a mutually beneficial relationship.”

He said that the model is not really changing. Adults and children are still being partnered to bless one another, “but the invitation is [changing]. The way that we are taking that first step changes and flips it on its head.”

Chitwood held back tears as he recalled a number of powerful moments when individuals were chosen and children were empowered to choose.

“We did not know how much anticipation would build in people and how important it would be to them to be chosen, and what were the reasons they were signing up to be chosen,” Chitwood said. “And so, at Soul City Church, we had two young ladies and we asked them, ‘Why did you sign up?’ And they said, ‘We were both in foster care our whole childhood, and as foster kids, we did not have very many choices at all, and it just seemed really powerful to us to say the first step in this relationship should be the child having the first choice.’”

The touching stories of human connection through “Chosen” are being experienced by the children as well.

Chitwood recalled asking one little girl, “‘What made you choose this family?’ And the little girl shared that her mom had died two years earlier, and the mother in the family [photo] reminded her of her mom.”

“Choosing party” is the term World Vision has coined for the day when the children get to select their sponsors from among all the photos. Chitwood attended one of those parties in Guatemala.

After the child chooses his or her family or individual, the sponsor receives a picture of the child holding their picture.

“The first thing the sponsor child sees is this family smiling ear to ear. And then the first thing that the sponsor sees is a picture of this kid elated, holding their picture, and then a letter to them telling them why they chose them,” Chitwood said. “It is just such an immediate, special connection to have.”

To learn how you can be “Chosen,” visit the World Vision website: https://www.worldvision.org/chosen.