How the Trump Administration Could Clear Up Regulated ‘Waters’ 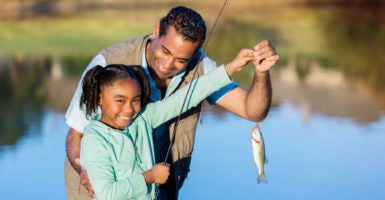 Overreach by the EPA and Army Corps of Engineers directly affects Americans, from farmers plowing land and families seeking to build their dream homes to cities and counties trying to build ditches to help prevent flooding. (Photo: Stock/Getty Images)

The Trump administration last month repealed the Obama administration’s infamous “waters of the United States” rule, by which bureaucrats tried to use the Clean Water Act to regulate almost every water imaginable.

But this repeal was just the first step in efforts by the Environmental Protection Agency and the Army Corps of Engineers to develop a new definition of “waters of the United States,” referred to as WOTUS, that is consistent with the rule of law. This definition would clarify what waters may be regulated under the Clean Water Act.

The second step, and the major one, is expected to take place within the next couple of months: The EPA and Corps will issue a final rule that includes their new definition.

The importance of this new rule can’t be overstated. For decades, the EPA and Corps struggled to develop a definition for “waters of the United States” because they consistently sought to expand their power without regard for what the Clean Water Act actually authorizes.

In February, the EPA and Corps published their proposed new definition of “waters of the United States.” To the agencies’ credit, they are doing something different: They actually are trying to respect the rule of law and the plain language of the Clean Water Act.

They are not including in the definition, for example, ephemeral waters (dry land except when it holds water a few days a year after heavy precipitation).

But this doesn’t mean that the proposed rule is very good. The agencies should make important changes to the final rule, including:

The proposed rule would define traditional navigable waters as “waters which are currently used, or were used in the past, or may be susceptible to use in interstate or foreign commerce … ”

The problem is this broad definition would ignore long-standing law, starting with a 1870 Supreme Court case called The Daniel Ball, stressing that traditional navigable waters must be used or susceptible to use as “highways for commerce,” and “trade and travel” is or may be conducted  on these waters.

The necessary commerce that must take place on the water is not a stationary activity, such as something recreational, but instead part of a commercial activity that helps move that activity along a channel of interstate or foreign commerce.

It is therefore critical that the EPA and Corps clarify that the waters must be used for the transport of commerce.

The proposed rule also appears to allow waters to be considered traditional navigable waters if they were used in the past for commerce, even if they are not used for commerce now or susceptible to use in commerce.

The final rule should clarify that, at a minimum, any water that is deemed a traditional navigable water must currently be susceptible to use in commerce.

The proposed rule would regulate intermittent waters and states that “‘intermittent’ means surface water flowing continuously during certain times of a typical year and more than in direct response to precipitation” (such as when the groundwater table is elevated or when snowpack melts).

This definition could include a vast amount of waters, including waters that in many ways might look like ephemeral waters.

The Obama rule regulated too many waters, including waters that generally would be considered land. The proposed rule appears to have some of the same problems because of this intermittent definition.

Justice Antonin Scalia’s plurality opinion in the 2005 Supreme Court case Rapanos v. United States, which addressed the WOTUS definition, excluded intermittent waters. It stressed the importance of waters being “relatively permanent” and “standing or continuously flowing” and also argued that at a bare minimum there must be “the ordinary presence of water.”

It is true that in a footnote to the case, Scalia acknowledged that the plurality of justices wasn’t excluding seasonal rivers such as a stream that has continuous flow for 290 days in a year or waters that dry up in extraordinary circumstance such as drought.

Any final rule should be consistent with the high court’s plurality opinion in Rapanos and exclude intermittent waters. This would also mean that a seasonal water could be regulated if there is an extraordinary circumstance such as drought or the water has continuous flow, such as the 290-day stream mentioned in the case.

The continuous flow arguably could be shorter, but it would need to be at least a majority of the year for various reasons, including the need to have the “ordinary presence of water.”

The Trump administration needs to get the definition of “waters of the United States” right. It isn’t enough merely to get rid of the Obama rule and replace it with a rule that still has many problems.

The proposed rule was a good start, however, and with significant changes, the final rule can be a win for the rule of law, property owners, and the environment.