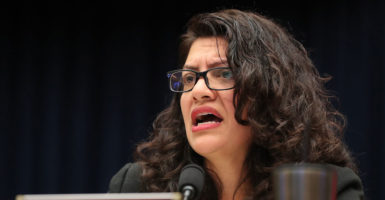 “It’s pretty simple,” Rep. Rashida Tlaib, D-Mich., tweeted last March, in calling for President Donald Trump’s impeachment. “No one is above the law, including the President of the United States.”

But perhaps Tlaib—among Trump’s harshest critics in Congress—needs to follow up with another tweet, in the interests of transparency. This tweet could read: “No one is above the law. Except me.”

According to a report issued last week by the House Ethics Committee, there is “substantial reason to believe” that Tlaib used campaign funds for personal expenditures, thereby violating both campaign finance laws and House ethics rules.

The alleged violations stem from $17,500 that her campaign paid her, apparently to cover personal expenses, after she was elected to Congress.

Text messages and emails between Tlaib and her campaign staff show that throughout her campaign she repeatedly asked her campaign for money to cover personal expenses like “car maintenance, child care, and other necessities.”

Federal campaign finance law (52 U.S.C. §30114(b)) prohibits the use of campaign funds for personal use. The law, including the regulations promulgated by the Federal Election Commission, defines “personal use” very broadly.

Personal use includes any “commitment, obligation, or expense of a person that would exist irrespective of the candidate’s campaign duties.” That plainly includes car maintenance, child care, and “other necessities.”

Additionally, House ethics rules prohibit representatives from using campaign funds for personal expenditures. They and their staffs are tasked with ensuring that their campaigns operate in compliance with the law.

While candidates may take a salary from their campaigns, there are very strict limits on that. Among the litany of restrictions is this one: The salary can only be paid for work performed before the election. The salary has to end the day the candidate is either elected or withdraws from the race and is no longer a candidate.

Tlaib’s eligibility for a salary paid from her campaign funds ended on Nov. 6, 2018, when she was elected to the House of Representatives. Yet her campaign continued to pay her through the end of December. She collected $17,500 after the election.

Tlaib’s lawyers concede that the payments were made after Nov. 6 last year, but argue that the money was for services performed before the election. But according to the report, documents taken from her campaign “suggest otherwise.”

Additionally, the checks confirm those dates, as do emails from Tlaib’s campaign treasurer. As to the $15,500 payment, her campaign treasurer’s records show that at least $8,000 of it was paid for work performed after the election, and the remaining $7,500 was an unspecified “adjustment.”

It certainly appears to be a clear violation of federal law. Perhaps it’s no surprise, then, that the best arguments her lawyers can come up with are that there was no “conscious disregard” of the law, and that it’s “most irregular” for the Office of Congressional Ethics to look into pre-election activities.

In other words, Tlaib should be excused because she didn’t bother to learn the law or because Congress should permit candidates to violate ethics laws with impunity until they get elected. It doesn’t take a lawyer to see how feeble these arguments are.

Given how bad this looks for Tlaib, it’s no surprise that she and her campaign staff refused all interview requests from the Office of Congressional Ethics.

And Tlaib’s problems extend beyond the Ethics Committee.

Both the Federal Election Commission and the U.S. Justice Department have jurisdiction over violations of federal campaign finance law. The FEC can force those who err to repay the money and impose a civil penalty – even where there was no “conscious disregard” of the law.

If Tlaib “knowingly and willfully” violated the law, that is a criminal violation that comes under the jurisdiction of the Justice Department. Criminal violations of the law can result not only in civil penalties, but prison time.