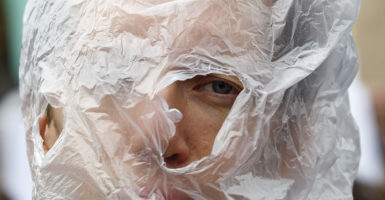 A climate activist covers his head with a plastic bag during a September demonstration at a United Nations climate summit in Kyiv, Ukraine. This week, the Baltimore City Council passed a ban on grocery store plastic bags. (Photo: Pavlo Gonchar/SOPA Images/LightRocket/Getty Images)

What do you do when your community faces crushing poverty, failing schools, and disturbing homicide rates?

In Baltimore, the answer is: Ban plastic bags, of course. Yes, Charm City is saving the world, one plastic bag at a time.

The Baltimore City Council passed a citywide ban on retailers’ use of plastic bags at checkout on a 13-to-1 vote Monday. If that weren’t enough, the city will now put a 5-cent charge on paper bags.

The legislation now awaits signature by Mayor Bernard Young. If he signs it, it wouldn’t take effect until late next year.

Councilwoman Danielle McCray was the sole vote against the measure. Though she supported the ban on plastic bags, McCray opposed the new 5-cent tax on paper bags.

“I know that pennies add up,” she said on Baltimore’s WJZ-TV Channel 13. “I know that dollars add up, and my vote will be a consistent ‘no’ when it comes to unnecessary taxes on my constituents.”

The problem is, bag bans are not just annoying and inconvenient, they also add up to little more than virtue-signaling of being “environmentally conscious.”

There’s even evidence that they end up being worse for the environment.

However, people began to use other kinds of plastic bags to make up for the lost supply.

Many customers actually reuse plastic bags for lining wastebaskets, among many other secondary uses. The study found that in areas that had plastic bag bans, there was a surge in the use of the thicker 4-gallon bags, which use more plastic.

The laws also create a huge uptick in the use of paper bags, which—according to some research—are actually worse for the environment than plastic bags.

The bottom line is, the bag bans have marginal or dubious value.

It’s notable that while Baltimore wages war on bags, the city has very real—and far worse—problems.

When one considers all of those problems, and then we see that the priority of Baltimore’s political leadership is getting rid of bags and tearing down Confederate statues, it’s no wonder the city is trapped in a cycle of despair.

As I wrote in August, when President Donald Trump harshly criticized the city in a tweet, Baltimore is dealing with a number of genuine crises.

Violent crime has spun out of control in recent years.

There were 342 homicides in Baltimore in 2017, the highest homicide count in the nation. The city recently hit 300 homicides, the fifth year in a row that has happened, with more than a month remaining in 2019.

In fact, the number of homicides is climbing in Baltimore while it’s falling around the rest of the country.

If that’s not bad enough, the city has an astounding amount of poverty to go along with crushingly high taxes.

Baltimore isn’t offering much hope for future generations, either. It has some of the lowest-performing public schools in the country, despite the fact that the city annually spends about $16,000 per student.

“In fourth- and eighth-grade reading, only 13 percent of city students are considered proficient or advanced,” according to The Baltimore Sun. “In fourth-grade math, 14 percent were proficient, and in eighth-grade math, 11 percent met the mark, according to the National Assessment of Educational Progress, a federally mandated test from the U.S. Department of Education.”

To top it all off, the city is contending with a heaping helping of corruption. The past three Baltimore mayors have resigned in disgrace.

Former Mayor Catherine Pugh, who at one time was billed as a “reformer,” resigned in May and has been charged with “conspiracy to commit wire fraud, seven counts of wire fraud, conspiracy to defraud the United States and two counts of tax evasion,” Fox News reported.

Pugh was originally caught in a scheme allegedly involving kickbacks for selling her children’s books to hospitals, in which she was able to pocket hundreds of thousands of dollars.

Rather than addressing these serious problems, Baltimore’s politicians opt for empty virtue-signaling. The residents of Baltimore are the ones left holding the bag, literally and figuratively.