Congress Shouldn’t Get Paid Until It Does Its Job. Why This Bill Is a Great Step. 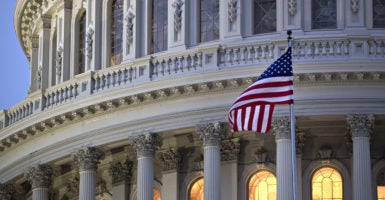 The fact that a month-and-a-half into the new fiscal year none of the 12 annual appropriations bills have been enacted is a sign of how dysfunctional the congressional budget process is.

Thankfully, more members of Congress are taking notice of the breakdown in the budget process and are putting forth reforms to not only create a more efficient budget process, but one that is also more transparent and responsible.

First, it would remove the assumption that federal programs grow at the rate of inflation from the Congressional Budget Office’s baseline.

Next, it would institute a “no budget, no pay” policy: If Congress doesn’t adopt a budget resolution by April 15 of each fiscal year, lawmakers would receive no pay until it does.

The Budget Process Enhancement Act is a positive first step toward removing the bias in favor of higher spending from the baseline and eliminating an accounting gimmick used to skew the impact of budget decisions.

Including a “no budget, no pay” provision should encourage members of Congress to debate budget and appropriations bills in a timely manner.

Congress should continue to pursue reforms that will create a better functioning and more responsible budget process.

First, it allows Congress to claim spending cuts relative to the baseline when spending is actually increasing when compared with non-inflation-adjusted levels. In other words, Congress may still be increasing spending, just not at the same pace as inflation would otherwise have increased it.

Second, it creates a bias in favor of higher spending. The Congressional Budget Office arbitrarily assumes that agency funding will increase with inflation, not based on actual needs or proposals.

Biggs’ and Norman’s bill would end the practice of adjusting baseline projections for inflation and require agencies to justify additional funding needs.

Federal budgeting should be about prioritizing funding toward constitutional responsibilities. Removing inflation from the baseline is unlikely to address the broader need for spending reforms that limit the reach of the federal government, but forcing agencies to justify new spending should slow the growth of discretionary spending and bring more transparency to the budget process.

One of the reasons that federal spending has grown over the past several decades is that lawmakers spend little time engaging in the broader federal budget outlook. Rather, they focus on discretionary spending, which is about one-third of total federal outlays.

That strategy has left the country $23 trillion in debt.

Adopting a “no budget, no pay” law would force Congress to more actively engage in the budget process. Thoroughly debating the broader fiscal outlook every year should bring more awareness to the unsustainability of the current budget path and lead to reforms to mandatory spending that lower spending and stabilize the national debt.

Passing a budget and appropriations bills is one of the few jobs that lawmakers are required to do each year. Yet, it has been nearly 25 years since Congress completed each individual step of the budget process before the start of the new fiscal year.

Over that period of time, the federal government has been plagued by an ongoing series of continuing resolutions, bloated omnibus spending bills, and numerous government shutdowns. Taxpayers are the real losers in all of this dysfunction.

In 2020, the federal deficit is projected to top $1 trillion and remain above that level annually for decades to come.

Now is the time for Congress to implement reforms to reduce spending and create a better functioning budget process. The ideas represented in the Budget Process Enhancement Act are a welcome first step.