Disney Again Faces Up to Its Racist Past 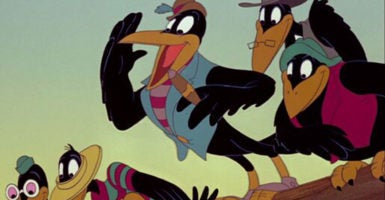 The wisecracking crows in Disney’s 1941 animated feature “Dumbo,” with their intensely poor grammar in the cadence of African American voices, are highly offensive. (Photo: The Walt Disney Co.)

Disney has come a long way.

Like most American girls, we grew up on Disney princesses. In 2009, when the animated feature “The Princess and the Frog” told the story of Tiana, Disney’s first black princess, we joined other black women across the globe in saying, “It’s about time.”

This week, Disney once again is facing up to its racist past.

The Walt Disney Co.’s new streaming service, Disney Plus, is generating positive and negative noise this week around its decision to include a disclaimer about older films in the studio’s 96-year history that depict racist stereotypes.

As noted by The Hollywood Reporter, Disney Plus put the following disclaimer at the bottom of the synopsis of some of the studio’s classic movies: “This program is presented as originally created. It may contain outdated cultural depictions.”

The warning appears, for example, in the synopsis for older animated films such as “Dumbo,” “Peter Pan,” “The Jungle Book,” and “Lady and the Tramp.” It also is used for the live-action films “Davy Crockett” (1955) and “Swiss Family Robinson” (1960).

We do not find this decision another example of caving to the politically correct police. Caving to the PC police would be leaving any films with questionable scenes in the Disney vault and not showing them at all.

The one film that Disney Plus did not bring out from the vault, 1946’s “Song of the South,” is so blatantly offensive in its portrayal of post-Civil War America that even those who police the PC police should be OK with its not being included in the studio’s currently available portfolio of films.

There is absolutely no question as to whether the caricatures in some Disney films are racist. For us, the only real question is whether the company’s disclaimers on Disney Plus should be stronger.

A disclaimer used by Warner Bros. is far more direct in precisely stating that “the ethnic and racial prejudices” of some films “were wrong then and wrong today.” For us, that is the key point.

We do not believe in erasing the history of America’s cultural or political legacy.  It is more important to view it from the understanding that the racism that was so comfortably shared in popular culture was wrong then and is wrong today.

It is not necessary for us to contort and twist these films into a revisionist history to make them more palatable today.

The wisecracking, zoot suit-wearing crows in Disney’s 1941 animated feature “Dumbo,” with their intensely poor grammar in the cadence of African American voices, are highly offensive.

Yes, the crows are ultimately the ones who champion the baby elephant Dumbo. But let us not try to pretend that Disney was not “othering” African Americans as buffoons.

It is almost impossible to watch the horrible portrayal of the Asian community in another animated Disney film, 1955’s “Lady and the Tramp.” A decade after Japanese Americans were forced to suffer internment camps in the U.S. during World War II, the message behind the sneaky, conniving, untrustworthy Siamese cats is clear.

In the rush to erase everything that is uncomfortable about racism in our nation’s past, we believe that Disney actually is striking an honest chord.

Don’t sweep it under the rug or hide it in the vault. A free marketplace of ideas demands that we keep these symbols of culture available for public dialogue and discourse. But we also must recognize that racism doesn’t age well because racism is always wrong.