The Role of ‘Big Data and Big Brother’ 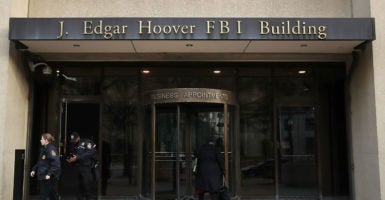 According to one study, law enforcement facial-recognition networks have more than 117 million Americans in their databases. The FBI runs facial-recognition searches against dozens of state driver’s license photo databases that primarily include law-abiding citizens. (Photo: Mark Wilson/Getty Images)

The Fourth Amendment to the Constitution guarantees the right of the people to be “secure in their persons, houses, papers, and effects against unreasonable searches and seizures.”

But as the digital world advances, corporations—including big tech—and the government know more and more about us than ever before, straining traditional notions of privacy.

What do big corporations and Big Brother know about us, and how do they use that information?

What is the relationship between big tech and the government, and how does that threaten your privacy? And what are the domestic and national security implications of the Supreme Court’s 2018 decision in Carpenter v. U.S., which held that cellphone users have Fourth Amendment rights in their historical cell-site location records?

Many of these tools and services make life easier and more enjoyable—even safer. But as technology advances and becomes an even greater part of our everyday lives, how much of our freedom and privacy are we giving up? And how much is too much?

According to one study, law enforcement facial-recognition networks have more than 117 million Americans in their databases.

While there’s no doubt that facial-recognition technologies have a host of new and innovative applications, their potential ubiquity and use by law enforcement prompt real questions about their impact on our behaviors and our societies.

Even more, at a time when foreign cybersecurity threats are growing rapidly, it’s important that we consider how we should balance the ever-present tensions between convenience, liberty, and security.

How is the law evolving to keep up with traditional notions of privacy?  What are the broader implications of the U.S. Supreme Court decision in Carpenter?

The Heritage Foundation’s “Preserve the Constitution” series seeks to restore the courts to their proper constitutional role and to enforce the constitutional limits on government.

Join us Friday, Oct. 25, for the sixth event in the series, “Big Data and Big Brother,” as three experts debate and discuss the rise of the surveillance state and the threats to privacy by corporations and the government.