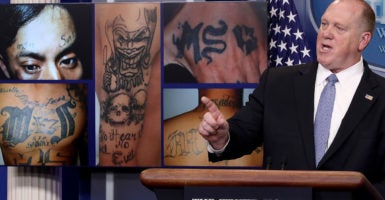 Tom Homan, the director of Immigration and Customs Enforcement, answers questions in front of gang-related photos from the MS-13 gang during a daily briefing at the White House July 27, 2017, in Washington, D.C. (Photo: Win McNamee/Getty Images)

Tom Homan, the former acting director of Immigration and Customs Enforcement, was shouted off stage at an immigration policy event by students opposed to President Donald Trump’s immigration agenda Wednesday.

Homan was scheduled to speak at the University of Pennsylvania as one of several speakers to discuss immigration enforcement under the Obama and Trump administrations. However, the former ICE chief was never able to participate because numerous protesters shouted him out, forcing him to leave the event.

“The ones who want to shout down meaningful discussion will remain ignorant,” Homan said Thursday, discussing the incident during an appearance on “Fox & Friends First.” “They stood outside the building with their signs and didn’t allow anybody to speak.”

Homan said that he had “enforced the laws of this country” for over 30 years under six different presidents, but hadn’t seen this level of protest until now. The former ICE chief also noted that the Obama administration deported illegal aliens at a higher rate than the Trump administration, but “we never heard of that” back then, he said.

“The sad part is, half the audience—I was watching the reaction on their faces—they were as disgusted I was. They were there to ask pointed questions. This is a serious issue,” Homan continued, noting the number of women who are raped and children who die trying to reach the border. “This is a big issue for this country, and it deserves conversation and debate.”

The incident didn’t appear to be that serious for the longtime immigration agent. At the sight of one protester’s misspelled sign, he said he couldn’t help but laugh.

“At one point I did chuckle because I looked over to the window and there were people out there holding signs. One young man, really upset, yelling and screaming, had a sign: ‘Abolish ICE’ and he misspelled ‘Abolish.’ So I’m thinking, he should probably spend more time in the classroom and less time protesting. I’m sure his family is paying a lot of money for his education,” Homan said.

The protest against Homan was expected. Before he was slated to speak, over 400 University of Pennsylvania students and alumni signed a petition demanding the school cancel the event.

“Under Homan, ICE continued to be a violent organization responsible for terrorizing immigrant communities, for the separation of immigrant families, and for the persistent violation of the human rights of immigrants and their loved ones,” one segment of the petition read. “Consequently, inviting Homan as a guest speaker contradicts Penn’s claim of being a sanctuary campus that is committed to ensuring the well-being and safety of all of its students.”

Students not only demanded the event be canceled, but also called on the university to no longer allow former or current ICE or Custom and Border Protection personnel to speak on campus, and to form an “immigrant support fund” for illegal alien students.

This is not the first time university students have refused to allow immigration officials speak on campus. Kevin McAleenan, the acting director of the Department of Homeland Security, was heckled off stage earlier this month when trying to give a speech at Georgetown University.