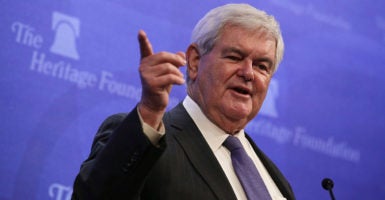 China is its own biggest problem as the communist state asserts itself on the world stage, former House Speaker Newt Gingrich says.

“The key challenge in China’s image is China,” Gingrich said Thursday during an event at The Heritage Foundation in which he discussed his new book “Trump vs. China: Facing America’s Greatest Threat.”

“I recently saw a senior Chinese leader, and I was trying to do research for the book and I was trying to get their version of some things,” he recalled before the audience at the think tank’s Capitol Hill headquarters. “So I said to him, ‘Can you explain why you have over a million people in concentration camps in Western China?’”

Gingrich, who represented his Georgia district in the House for 20 years and ran for president in 2012, said he was stunned by the Chinese official’s response.

China’s fixation on trying to normalize its human rights abuses and other destructive economic and social policies is one of the reasons the communist nation is such a threat, Gingrich said.

“It’s really hard to build a positive image when you have ‘boarding schools’ of people who have escaped from … concentration camps,” he said.

“What the current Chinese government would like is to be able to project an image of the China they wish you would believe in and then have you not ask questions, and I think that’s not the way the world works.”

Gingrich said that Chinese President Xi Jinping, who also is general secretary of the Communist Party of China, has his work cut out for him in responding to freedom fighters in Hong Kong.

“That’s why they have a challenge in Hong Kong, because on the one front, they don’t want to create a massively bigger Tiananmen Square [massacre], but on the other front, it’s really dangerous for the dictatorship to have all these people running around being free,” Gingrich said.

“And I think Xi Jinping has real challenges trying to figure out how does he solve this.”