Trump Announces $50 Million for Christians, Other Minorities in Syria 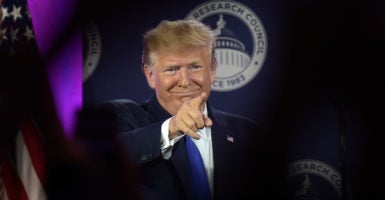 "I’ve made clear to Turkey that if they do not meet their commitments, including the protection of religious minorities, and also watching over the ISIS prisoners were captured, we will impose a very swift, strong and severe economic sanctions," President Trump says at the Values Voters Summit.(Photo; Eric Baradat/AFP/Getty Images)

After facing criticism from Christian leaders over his decision to withdraw U.S. troops from Syria, President Donald Trump defended the decision in front of a largely evangelical crowd Saturday.

“This week I directed $50 million to support Christians and other religious minorities in Syria. I did it on Friday,” Trump said during his remarks at the Values Voter Summit.

The president said his administration has so far provided more than $500 million in support of religious minorities oppressed in Syria.

Pastor Andrew Brunson, the American pastor who was held captive in a Turkish prison for two years before the administration negotiated his release, was on the podium with Trump and prayed with the president before the speech.

“I’ve made clear to Turkey that if they do not meet their commitments, including the protection of religious minorities, and also watching over the ISIS prisoners were captured, we will impose a very swift, strong and severe economic sanctions, like we did in my negotiations to get Pastor Brunson out,” Trump said. “Otherwise, I hate to say this pastor, you’d still be there. I hate to say this also–and this isn’t done from ego–any other president of the United States, you would still be there.”

Shortly after Trump’s speech concluded, the White House released more details, stating the $50 million would be used for “stabilization assistance for Syria to protect persecuted ethnic and religious minorities, and advance human rights.” The money is set to go for emergency Syrian human rights defenders, civil society organizations, and reconciliation efforts supporting ethnic and religious minority victims of the conflict.

After Trump announced he was withdrawing U.S. military from Syria, exposing the Kurds and possibly Christians to danger, Christian leaders such as the Rev. Franklin Graham and the Rev. Pat Robertson called on Trump to reconsider.

Regarding the Kurds, Trump said: “Let them have their borders, but I don’t think our soldiers should be there for the next 15 years guarding a border between Turkey and Syria when we can’t guard our own borders.”

Trump called generals in Washington, “highly overrated,” and complained, “The military industrial complex came down on me.”

But, the president had a sobering tone as he recalled emotional stories of family members greeting the returning coffins of fallen soldiers.

“We’ve been in these wars now, one of them 19 years, and they didn’t fight to win,” the president said, a reference to the conflict in Afghanistan. “They fight to just stay there. And, in Syria, we were supposed to be there for 30 days and we’ve been there for 10 years. These wars, they never end.”

He added, to applause from the crowd: “We can’t stay there forever. We have to bring our great heroes home. It’s time.”

Trump also talked about the House Democrat impeachment investigation into his phone call with Ukrainian President Volodymyr Zelenskyy, in which they talked about former Vice President Joe Biden’s son Hunter Biden’s business dealings in the country–among other topics.

“Maybe we just impeach them because they are lying,” Trump said. “What they are doing is a terrible thing to our country.”

Members of Congress can’t be impeached, but in rare instances have been expelled from Congress.

Trump said Schiff was “crooked” for making up the contents of Trump’s call with the Ukrainian leader during the opening of an intelligence committee hearing last month. After being criticized during the hearing, Schiff said he meant it as a parody.

Trump noted Pelosi had previously appeared to be staving off an impeachment effort by her more radical members.

“For those of you who think she was reasonable for the last six months, when she said, no, no, no–I said she’s going to do it. She just wants to have it carried out closer to the election,” Trump said. “Not a good person. I think she hates our country. If she didn’t hate our country, she wouldn’t be doing this to our country. It’s a fraud.”

Trump said the far left is determined to “shred our Constitution and eradicate our beliefs.”

“Frankly these people are crazy,” the president said.

He noted the contrast between the whistleblower report and the transcript of the call.

“The whistle blower said quid pro quo eight times,” the president said. “It was a little off. No times.”