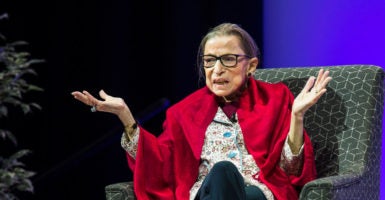 The first Supreme Court justice to ask a question Tuesday was Ruth Bader Ginsburg, who said it couldn’t have been in Congress’ mind in 1964 that discrimination “because of sex” meant discrimination based on sexual orientation. Pictured: Ginsburg speaks Oct. 3 before an audience at Amherst College in Amherst, Massachusetts. (Photo: Erin Clark for The Boston Globe/Getty Images)

The Supreme Court, returning this week for the beginning of its 2019-2020 term, heard oral argument Tuesday in three cases asking it to decide whether the definition of sex in U.S. law includes sexual orientation and gender identity.

At issue is the meaning of the word “sex” in Title VII of the 1964 Civil Rights Act, the primary federal law prohibiting discrimination in employment.

The cases were brought by a gay child welfare services coordinator and a gay skydiving instructor in the first argument, and, in the second argument, a male funeral home director who was fired after announcing he was transitioning to become a woman.

A packed house was promised outside the Supreme Court building, where people began lining up Friday for public seating. And inside the courtroom was just as busy, with five lawyers appearing before the justices.

Pamela Karlan, a professor at Stanford Law School, argued on behalf of the gay employees in Bostock v. Clayton County and Altitude Express v. Zarda. Jeffrey Harris, a lawyer with the firm Consovoy McCarthy, made his Supreme Court debut representing the employers in Bostock and Zarda.

Following a new rule announced last week by the high court, the justices allowed each advocate to make a two-minute presentation before jumping in with questions.

Some common themes from the justices’ questions were what “sex” meant in 1964, whether the court should act when Congress could amend the law, and what this could mean for single-sex bathrooms, sports, and more.

Justice Ruth Bader Ginsburg was the first to fire off a question. She brought up the fact that when Congress passed Title VII as part of the Civil Rights Act in 1964, it couldn’t have been in Congress’ mind that discrimination “because of sex” meant discrimination based on sexual orientation.

Ginsburg underscored this point by noting that homosexuality was at that time classified as a mental disorder, and many states criminalized sodomy.

Karlan admitted that is true—calling it the “days of ‘Mad Men,’” in a reference to the hit TV series—but said the court has interpreted Title VII to cover other things that weren’t within Congress’ mind, such as sexual harassment and sex stereotyping.

When Harris took the lectern, he explained that sex and sexual orientation are “independent and distinct characteristics,” and that Title VII requires courts to compare similarly situated people for differential treatment.

Francisco echoed this, saying that sex means “whether you’re male or female, not whether you’re gay or straight.” He argued that any doubt regarding the meaning of sex in Title VII “is removed by the history … and related statutes since.”

Justice Samuel Alito noted that Congress has considered various proposals to amend Title VII and, in fact, the House of Representatives passed the Equality Act last spring. He asked whether the courts should leave this policy issue to the legislative branch.

Karlan countered that a ruling that sex discrimination includes sexual orientation would be no different from the court’s earlier rulings finding male-on-male sexual harassment and sex stereotyping were forms of sex discrimination.

Chief Justice John Roberts pointed out that roughly two dozen states have passed laws prohibiting employment discrimination based on sexual orientation and gender identity, and many have at the same time provided robust protections for religious liberty.

Francisco also addressed this point, saying that Congress is better suited to weigh the competing interests at stake and address the need for religious or other exemptions. He suggested the Supreme Court should not short-circuit the democratic process and instead allow Congress to work out what changes, if any, the American people want to see in Title VII.

The justices spent a lot of time talking about whether employees’ interpretation of Title VII would spell doom for single-sex bathrooms, sex-specific dress codes, single-sex college sports teams, and shelters for battered women.

Title VII, after all, is a statute promoting women’s equality, Bursch pointed out, and it allows employers to acknowledge that there are differences between men and women.

But the ACLU’s Cole tried to avoid answering these questions, eventually responding that one has to consider “not just whether [a single-sex or sex-specific policy] differentiates, but whether it differentiates in a way that injures,” and whether a reasonable person would experience “a significant or trivial harm.”

“Most instances, that’s not going to be a significant harm,” Cole said, but when, for example, “you ask a transgender person to dress in a way that is contrary to their sense of gender identity, you have imposed a significant harm.”

Karlan put it slightly differently, explaining that you first look for people being treated differently based on their sex, and then you ask if a reasonable person would be injured by that differential treatment.

Justice Neil Gorsuch wanted to know how one decides what is “reasonable.” Karlan replied that an “idiosyncratic preference” wouldn’t void a dress code or bathroom policy.

Anyone hoping for clarity after the day’s argument was left wanting. After two hours of oral argument and dozens of questions, there was not much agreement among the justices.

Justice Brett Kavanaugh, the high court’s newest justice, barely spoke at all. The justices will take the next several months to wrestle with the questions in these cases and likely issue rulings by the end of June.