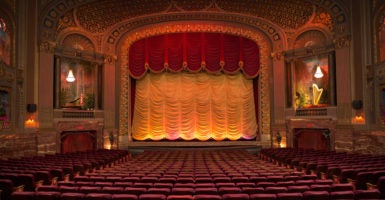 British actress Oluwaseyi Omooba was set to star in a stage play called “The Color Purple,” but she was abruptly fired for her Christian beliefs. (Photo: Ariel Skelley/Getty Images)

You’ve heard of seeing red. You’ve heard of feeling blue. And now you’re about to hear of a new state of mind brought to you by “The Color Purple”—resoluteness.

That resoluteness was shown by a 25-year-old British actress, Oluwaseyi Omooba. Omooba was set to star in the stage musical based on the Alice Walker novel “The Color Purple,” but was abruptly fired for her Christian beliefs.

A fellow actor scrolled through Omooba’s Facebook feed, going back five years to Sept. 18, 2014, to find a post in which she said homosexuality was wrong.

The actor asked Omooba publicly (via Twitter) whether she would renounce her old post or “remain a hypocrite.” The theater and her agents asked her to recant.

But when Omooba refused to deny the authority of Scripture, they sacked her.

Although she is clearly a talented actress, Omooba no longer receives invitations to audition, nor can she find an agent to work with her. One agency told her, “Homophobia is illegal. It is not a matter of faith.”

To Omooba, these sudden attacks came as a surprise.

“They knew that I was a Christian and they knew my stance on marriage, on my faith, on God, on many different things that are in the Bible,” she said. “On all my social medias I always post stuff about God, the Bible, or scriptures.”

Her father, Pastor Ade Omooba, is a co-founder of Christian Concern.

The experience hurt her.

“I was quite taken aback. I was like, ‘Wow, people really think I hate them?'”

Throughout these trying circumstances, Omooba has refused to back down from her biblical convictions. Now, with the help of the Christian Legal Centre, she is suing the theater and her agents for wrongful termination under British law.

Surely Omooba had said something egregiously hateful to get so utterly canceled, right? That would have been simpler, but she said nothing of the sort.

She had written on Facebook more than five years ago: “Some Christians have completely misconceived the issue of Homosexuality, they have begun to twist the word of God. It is clearly evident in 1 Corinthians 6:9-11 what the Bible says on this matter. I do not believe you can be born gay, and I do not believe homosexuality is right.”

As to whether anyone can be born gay, a landmark, pro-LGBT science paper released this summer concluded, once again, that there is no “gay gene.”

Besides having science on her side, Omooba simply cites the Bible and says that she believes it. In the verses she cites, 1 Corinthians 6:9-11, the Apostle Paul includes homosexuality in a long list of sins. But the point of the passage is that hope, forgiveness, and cleansing from all these sins can be found in Jesus Christ. Where is the hate in that?

For example, some who indulge same-sex attractions often cannot tolerate anyone who says, “I do not believe homosexuality is right” because they cannot tolerate their own conscience.

Of course, it’s not loving to abandon someone in sin without proclaiming salvation to them. The Christian message of love comes in the power of the Holy Spirit, who has been convicting people of sin since he came.

A millennial British actress rarely makes news in Washington, D.C., but this one did. That’s because Omooba is just as much a star in the kingdom of God as she would have been in “The Color Purple.”

The same attitudes that persecuted her for resolutely standing on the Word of God in Great Britain lead people to attack Christians in America, too.

Thankfully, here we have the First Amendment to legally protect religious freedom—something Omooba does not have. But what she does have is a fear of God that is greater than her fear of man.

We ought to pray for God to give us the same strength to provide the same loving, steadfast testimony in the face of hateful opposition.